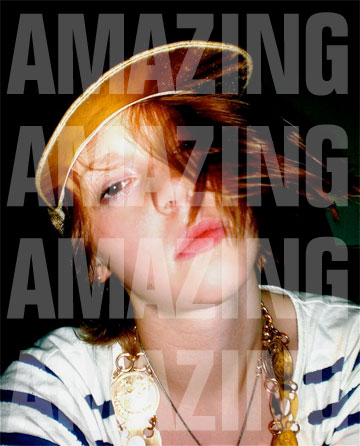 La Roux is a young lady who makes modern-sounding elec­tronic pop music. This has not escaped the attention of Kitsune whose new com­pil­a­tion, 'Kitsune Maison 6', is their best yet, and features La Roux's song 'Quicksand'. Kitsune are also releasing La Roux's con­tri­bu­tion as a single in November, before Polydor take over and work their magic in the new year. You can hear 'Quicksand' and some other tracks on La Roux's MySpace, www.myspace.com/larouxuk, but there's bigger stuff to come.

1. Her real name is Elly Jackson.

3. Her MySpace blogs include a string of mis­lead­ing state­ments and downright lies along the lines of "I went for a ride in my disco ice cream van". (La-so-called-'Roux' does not even own a normal ice cream van, let alone a disco one.)

File this one under pop music that sounds like dance music/dance music that sounds like pop music, alongside Little Boots, Frankmusik and Lady Ga Ga, although La Roux's own influ­ences include Michael Jackson, The Knife, Human League, Talk Talk and CSS. The whole thing also has the feel — in a com­pletely positive way — of an east London Lily Allen (even though La Roux is from Brixton) and one would expect to see La Roux on quite a few of the 'Big For 2009' features as they start rolling in around the end of the year. That said, she's already big for 2008 at Popjustice HQ and there's no reason she can't already go on your own People I Enjoy Listening To Quite A Lot lists right now. Oh, and don't be scared off by how sort-of-cool this might appear now, it's still at the boring 'taste­m­ak­ing' stage etc.