I was just watching the quite good music video for that incred­ible new John Newman single when this unfor­tu­nate looking ‘wrap­around’ ad thing for a different John, on money-grabbing music video ‘hub’ VEVO appeared before me. Just look at that face.

The Country Artist John Mayer does not look happy at all about being stuck as the wrap­around advert­ise­ment for a proper good song.

Would you The Listener/Viewer, really be so enthralled and intrigued by the facial expres­sion and general ‘rugged’ demeanour of Mayer, that you felt it necessary to click through to the ever-so-fas­cin­at­ing John Mayer ASK:REPLY ‘Q&A session’ that the world class marketing folk at VEVO have branded must-see ‘video content’ because gram­mat­ic­ally ques­tion­able colon deploy­ment is currently ‘all the rage’? So what the bloody hell could have Johnny down? I offer five possible conclusions.

1. He's having a spiritual crisis

I actually bothered clicking through to this ASK:REPLY thing to see what all the fuss was about and the first question he answered was ‘why are you wearing a bandana all the time lately?’, so it was good to know in the first thirty nine seconds that my decision to check out this ground­break­ing content was a good one.

His answer was “it might be a spiritual thing, where I think I’ve got long hair again, I don’t really know”.

2. He knows what's happening in his name over on Spotify

One of the most popular songs under ‘John Mayer’ on Spotify is a song called '7th Street'. The amazing thing about this is it’s not actually by the afore­men­tioned John Mayer, but another artist with the most incred­ible artwork you’ll ever see. WARNING: IMPACT. The song is one minute and fifty five seconds of what can only be described as a ‘Sunday afternoon jam session with the lads’.

Maybe John knows that this artwork exists and upset that, being the wrong John Mayer, he cannot have it removed.

3. He wishes he had some BANGERZ

“I would love to come out of the studio with a CD‑R, go to the hottest club in town, hand the DJ the disc, step back, order a drink, and listen to my CLUB BANGER that I did with somebody.”

This is an actual thing that John Mayer said in this ASK:REPLY thing.

4. He has issues with the very existence of VEVO

5. John became too warm during the photo shoot and is simply quite uncomfortable

Over on John's website, in a slightly more promising pro­mo­tional portrait in which Mayer appears to have been ‘suddenly inspired’, Mayer is seen in a blue t‑shirt, a red overshirt, a ‘mustard’ jacket AND some sort of ‘shawl’, made even more absurd by the use of a ‘cowboy hat’. OH YES, TAKE ME THERE.

Admittedly it could just be the 'vul­ner­able look' he's going for but there's certainly some sort of under­ly­ing issue that's con­trib­uted to this decision. I wish all the best to John on his road to recovery from The Plight Of The Sadface. 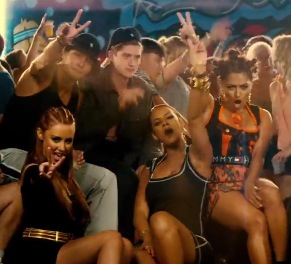