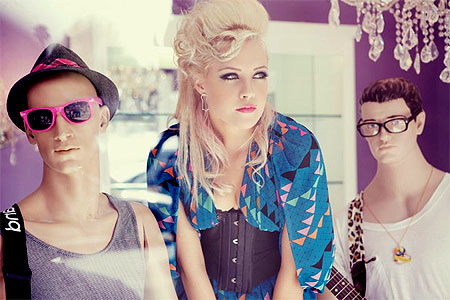 Well there's some excellent news for fans of Jessie Malakouti.

You will of course remember her v amazing pop tune 'Standing Up For The Lonely' — in many ways everything we all want from a Kylie single, except not sung by Kylie — which was a Popjustice Song Of The Day last year.

Well Jessie's been keeping us in the loop with her movements and was very excited to tell us last month about her new 'thing'. It is called Jessie & The Toyboys. It's a band and she is in charge which is just as well because the men in the band are man­nequins. Perhaps they will come to life one day like in that film about man­nequins — we forget the name. Explaining her new band setup, Jessie tells us that it is "an ever rotating col­lec­tion of per­fec­tion at my disposal — the current lineup is #73 on guitar #12 on keys with #25 on drums and #4 1/2 on bass. Mannequins don't talk back and are easy to write songs with".

Jessie's been on and off the radar a lot over the last few years but she's — as they say on light enter­tain­ment shows — 'a big talent' with enough proper actual popstarry xfactular 'star quality' to be a brilliant ambas­sador for her own tunes which is about ten times more than you can say for most of the half-arsed dipshit bellends clogging up the wannabe pop conveyor belt right now.

Here are bits of a few tunes.

'The Radio's Talking To Me' (amazing).

Tinchy Stryder — 'In My System'