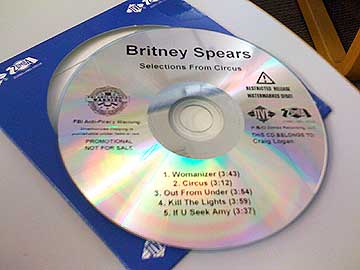 Alright then, due to 'over­whelm­ing public demand' (ie a string of emails ranging from the polite to the downright offensive) here are some words about tracks from the Britney album.

'CIRCUS'
This is the title track. This means the song's called 'Circus', and it's from the album 'Circus'. "I run a tight ship," Britney announces, "so beware — I'm like the ringleader, I call the shots, I'm like a fire­cracker I make it hot, now put a show". What does this mean? Well, she is a ringleader on a ship — we presume this is something to do with a special circus on a cruise liner of some sort. Basically Britney is comparing herself to lots of things at the same time. Your English teacher will tell you this is a silly thing to do — but Britney is allowed to do it, because she is Britney. The track comes with massive thudding elec­tronic R&B pro­duc­tion and there's a lot of stopping and starting, including a a built-in MTV-style dance breakdown segment. The chorus lyric is "all eyes on me in the centre of the ring just like a circus" but the best bit's the bridge, with its "I feel the adren­aline moving through my veins, spotlight on me and I'm ready to break, I'm like a performer with this world as a stage" bit. There's all sorts of other stuff about "don't stand there watching me, following me, show me what you can do". Bits of it are a lot like 'Break The Ice' from the last album, but with an extra layer of Big Production.

OUT FROM UNDER
'Blackout' didn't have any big ballads so here is one for 'Circus'. It's incred­ibly similar to this version…

…of the song but with more guitar (weedy guitar, not big proper guitar). The production's a lot less sparse and a great deal more 'Britney ballad' (in the 'I'm Not A Girl Not Yet A Woman' tradition). Basically the most inter­est­ing thing about Britney's version that you can't hear on the Joanna Pacitti original is the finale, which ends with a great "from under, from under, from under" bit.

KILL THE LIGHTS
Well this one has def­in­itely leaked so we're bol­locksed if we're going to spend time trying to describe it when we can just post this YouTube link.

The fact that this has been on YouTube for two days already without Sony pulling it via a copyright claim suggests that Sony leaked the song them­selves, but it might just be that everyone at Sony is busy doing something else, like watering the plants or eating Haribo.

IF U SEEK AMY
This is the one people are excited about because the words "if you seek Amy" sound like "F‑U-C‑K me". After a "la la la la la la la la, la la la la la la la la" intro the song sort of throws itself into a ridicu­lous faux-lesbo 'romp' in which Britney looks for girl called Amy in a club ("oh baby baby have you seen Amy tonight, is she in the bathroom?"), can't find her while the club's closing, bangs on about "love me hate me, say what you want about me but all the boys and all the girls are ready to f‑u-c‑k me" and then goes bonkers over a lot over a thun­der­ous Timbaland vs Scooter pro­duc­tion job. There are some "ha ha he he ho ho ho" bits, a great whooshing noise into the final chorus and an over­rid­ing sense that this might be one of Britney's most ridicu­lous record­ings to date.

'VERDICT': It's 'Blackout 2.0' — this is good news, 'Blackout' was a phe­nom­enal album — but seems to include a lot of posturing and also seems to be quite gimmicky, which hopefully won't extend across the entire album. The inclusion of a song like 'Out From Under' suggests that this album, as a whole, might be a bridge between 'In The Zone' and 'Blackout', or at least a bridge between 'Blackout' and a next album more along the 'In The Zone' lines. That didn't make any sense at all, did it. Anyway if these are the very best songs on the album we're probably heading for a 7/10 sort of affair but it's hard to second guess a Britney album so what it will end up like is anybody's guess.

Something good from The Killers