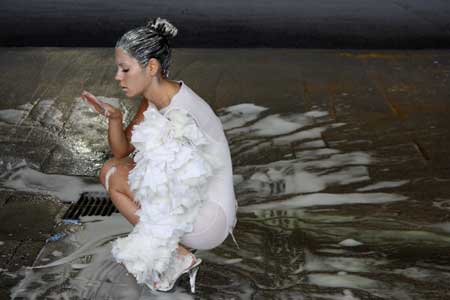 Marina & The Diamonds has done a new video for 'I Am Not A Robot'.

EDIT: This is not actually a proper new video, the Rankin one is still quote-unquote very much the official once and this is just a 'visual' for her tour. Repeat this is not the video.

It is a bit like 'Bittersweet Symphony' except without Richard Ashcroft's face in it and for that, readers, we should all be really quite grateful. The video also sort of makes Marina look like she might be a bit of a mentalist in a 'please excuse my friend as she covers herself in Dulux and fists a stuffed swan, she doesn't get out much' kind of way. That's not neces­sar­ily a bad thing. In fact some would say it's a good thing. The last thing you want from an International Pop Celebrity is someone who puts their drink on a coaster and what we can def­in­itely deduce from this video is that Marina would NOT be the sort of person to use that sort of tabletop-pro­tect­ing item.

NB: Videos should never feature 'cast and crew' at the end.

This is still the best video.

[youtube]tmvfQURreWM[/youtube] There's a hilarious 'bloopers' tape from that shoot, we'll have to show it to you one day.

Diagram Of The Heart — 'Dead Famous'