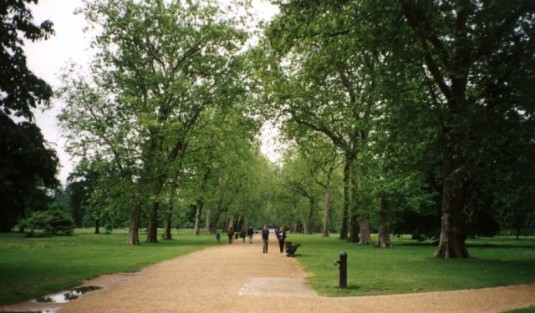 We've seen lots of people tweeting today about the low volume of last night's Blur show in Hyde Park. Just like we saw people com­plain­ing that the Bruce Springsteen, Paul Simon, Wireless and Madonna shows were too quiet.

This isn't just people moaning for the sake of moaning. At the two Hyde Park shows we attended — Madonna and Wireless — you just couldn't hear the music properly in the majority of the park. It killed, as they say, 'the vibe'. Most people accept the fact that open-air events in central London are never going to get to the ear-splitting point of a show in a club, but when the music is drowned out by con­ver­sa­tions happening two people away you have to accept that Hyde Park as a music venue is not fit for purpose.

In a BBC News article at the end of last year, in relation to noise com­plaints following 2011's Hyde Park events, a spokesman for Royal Parks said that a cut from 75 to 73 decibels, which was being requested, would make it an "unviable concert venue". From what we can tell from this sub­sequent story the requested cut was not made, but there was a new limit on bass noise as well as sound "further away from the stage and in quieter areas where the noise levels must not exceed 65 decibels".

We're not sure if that means that the areas 'further away from the stage' are indeed 'unviable' for exper­i­en­cing a pop show, but it rather defeats the object of staging a massive music show if large pro­por­tions of that massive crowd can't hear the music.

Do you think artists are aware of what the real exper­i­ence of a Hyde Park show would be like? We think they probably didn't know in advance. We hope they know now. We hope that next year artists refuse to play Hyde Park unless their fans can hear the music properly. And we hope that if the volume remains the same next year, fans will know in advance that the artists will be deliv­er­ing only half a concert exper­i­ence, and that ticket prices should be adjusted accord­ingly. If artists, their managers and their live agents continue to charge full whack, they'll be taking the piss.

Tyler James has been writing some more songs with Guy Chambers