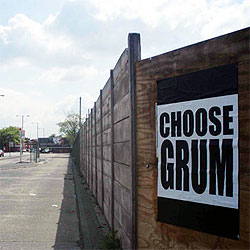 The Grum album is a bit under­whelm­ing but when he gets it right* he gets it very right indeed and the new single, 'Through The Night', is a good choice.

Its video seems, at first glance, like an example of the sort of generic clip attached, seemingly at random, to club tunes on the verge of com­mer­cial greatness. Grum's previous video, for 'Can't Shake This Feeling', seemed like a par­tic­u­larly barbaric instance.

As it turns out, the 'Through The Night' video is a quite funny but also rather affec­tion­ate gay love story which fits the tune so well that it almost feels like the song actually inspired the video treatment.

(The vocal is from Toto's v amazing 'We Can Make It Tonight'.)

After over ten minutes of banging our heads against the brick wall of pop punnage we asked Popjustice's Twitter followers to come up with the headline for this article. Congratulations to SuperCracko who came up with the winner.

The Brothers Grumm
It's Grum Up North
New Video has been released by person/group I've never heard of. Enjoy!
Grum and get it boys
BRUUUUUUUUUUUUUUUUUUUUUM
Grum, Sodomy And The 'Tache
Cop A Load Of This
Magrum PI
Grum's Fairy Tale
Grumble in the jungle
To the beat of the Grum
Ee by Grum
Mustn't Grumble
Crum and coke
Grum on my tits (THAT'S ENOUGH OF THAT THANKS — ED)

Robyn — Hang With Me