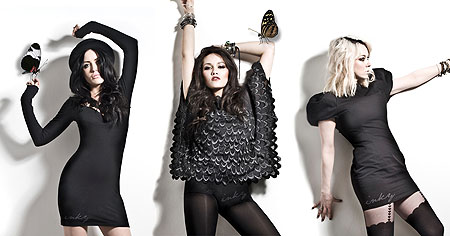 We're very much liking a new girlband by the name of Inky. They're (left to right) Anna, Aimee and Bobbi.

A couple of weeks ago they sent us one of their tunes and while it's all a bit rough around the edges (this isn't an expens­ively invented major label project — the band say they formed them­selves, and are still unsigned) there's something odd and brilliant about 'Let's Get Sad'.

They've made a cute video thing (well we say 'video thing', it's literally a video) for the track and it LOOKS A LITTLE BIT LIKE THIS.

We asked the band for ten facts about them­selves and this is what they told us.

1. The name 'INKY' came from a slang term used in the 60's/70's meaning sus­pi­cious or mys­ter­i­ous, its also the name of a really cool character in 'Pacman'.

2. We put ourselves together.

4. When we recorded 'Let's Get Sad' we used a mic that Stevie Wonder had used. This excited us.

5. Aimee is oper­at­ic­ally trained and likes to wake us up in the morning singing 'Pie Jesu'. Bobbi's morning starts at 1pm.

7. We have a website, it's pretty, have a look: www.inkymusic.com.

8. We fantasise about busking in the street with Dick Van Dyke and his one man band.

10. WE THINK POP JUSTICE IS (That's enough of that — Modesty Ed) (Also Popjustice is one word — Popjustice Ed)

We don't know about you, readers, but our thoughts drifted elsewhere as soon as we got to the bit about them fan­tas­ising about dick, although one fact they managed to leave out is that Anna from the band once in a Liverpool trio by the name of The Genie Queen, who were featured on Popjustice before it was shit and went on to give the world Abigail Clancy and Lauren from Frank (amazing).

Here's another one of Inky's songs — it's called 'With U'. Sloppy grammar.

[youtube]lmcgABIrlps[/youtube] So what have we learned?

I. Quite good songs.
II. Quite nice voices.
III. Quite pretty.
IV. Quite duff name but we'll get used to it.
V. Job done.