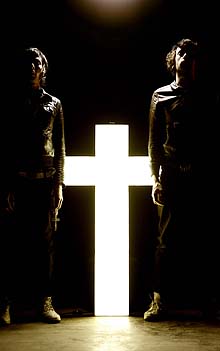 In the absence of Daft Punk spending anytime near a recording studio in the past year, it has been left to Justice to take their place as the French dance duo of choice.

They should have had a Top 10 single by now with that 'DANCE' track but something went wrong. We expect someone is out of a job over the whole affair. Anyway, we spoke to Justice before one of their pop concerts recently and topics discussed included plans for their own musical comedy, playing at village fetes and why they don't want Franz Ferdinand getting involved on their next album.

The chatter of Popjustice 5