More often than not album playbacks involve sitting in a fairly hot room in a record label office, usually in west London, with a small group of other journ­al­ists and a couple of PRs. There's usually a lot of awk­ward­ness. Sometimes, as with the Daft-Punk-up-the-Shard-record-label-budget-spunka­thon last year, it's something slightly more elaborate. Occasionally, however, playbacks will take place abroad because the artist lives in another country and they're big enough to get people to travel, or it's quite a nice way of dis­tract­ing people from the actual album in question.

For 'Costume Makes the Clown' chanteuse Shakira, I went to Barcelona to hear 'Shakira' — which obviously leaked all over the place the night before I left anyway — and to generally have quite a nice time in a posh hotel near the sea with a load of foreign journalists.

Having arrived at the W Hotel for the playback 'event' I proceeded to queue up behind a gaggle of smartly-dressed people outside the room in question. A room, by the way, labelled 'Great Room 2'. Incredible.

I'm not sure if it was some sort of tactic to throw people off the scent or if someone had just forgotten to update the board, but the room had a sign next to it that read,  'Spirit of Excellence: Growing Values', which seems a bit of a long-winded album title even for Shakira.

Obviously having flown out to Barcelona for a whistle-stop tour of hotels and taxis I was told I wasn't on the list. Amazingly this was because I was down simply as 'Pop Justice', which also means I am down on the table plan like this:

Later when I have a micro­phone thrust in my face to ask a question (more on all that in due course), I am addressed as Mr Pop Justice, while other people on my table are down as Regional Radio and Tabloid 1.

Once inside we were all presented with another hint that this would be A Big Event: a wall of Shakira. I remember at the time thinking 'I will take this picture of it for now but later, after a few wines, I'll come back and stand in front of it and have another one taken'. Unfortunately by the time I left the wall of Shakira had been taken down. :( Then inside a giant hall laid out like a Shakira-themed award ceremony with circular tables, a stage at the front and two big screens featuring the album 'art', we were serenaded by the album. 'Spotlight', '23', 'The One Thing' and the Sia-assisted 'Chasing Shadows' were good, but you probably already know that due to the afore­men­tioned leak. But here's something you don't get with the leak: lyrics scrolling up on a massive screen so that if you're so inclined you can have a bit of a singsong, although no amount of alcohol can help with 'Loca por Ti' to be honest.

It's all very pleasant and the food involves things like giant prawns in shot glasses, foie gras and fish on toast.

While Shakira may be good with a ska-tinged singalong or a car­ni­valesque football-themed banger, she's not amazing with time-keeping and so the 8pm start for the Q&A drifted to 9:05 before suddenly, with a brief wave and a bow, there she was! Compered by your friend and ours Kevin 'Pop Prince' Hughes, there was some chat about how great she is and how amazing the album is etc. There was a funny bit where she basically said that col­lab­or­at­ing with other people can get a bit annoying when she doesn't get on with them, but she obviously didn't name names. (I threatened to shout 'WAS IT BEYONCÉ?' but chose instead to keep quiet and drink my red wine.)

For some reason I was picked to ask a question and in my panic I suggested to the table of label people that I would ask her who she'd trust more to babysit her son, Beyoncé or Rihanna. The reaction was, shall we say, muted, so I had a quick re-think and asked her a fairly boring question about how hard it must have been picking the track­list­ing for the album given the fact that it's taken two and half years of recording and she probably had about 70 songs.

The was her response:

"Well the whole process started two and a half years ago, some things happened in the middle, among which was having a baby. Small detail. There was a lot of stops and go's and back and forth and many song I discarded and many songs survived and this is what it is. This album is a result of that process of creation and self-doubt and exper­i­ment­a­tion. That's why I decided to self-title it because this is not a thematic album, this is not a con­cep­tual album. It's an album that has many different genres and vari­ations and after all, it is just a reflec­tion of who I am as an artist and as a person — with imper­fec­tions and all.  It's just me, there, honestly. I always try to listen to my gut and follow my instinct. Every artist has to rely on their instinct — it's all we have to survive in this industry, really."

After my slightly dry question the micro­phone was then passed to another man who asked Shakira when her football-playing boyfriend — who was sitting in the room — was going to propose to her. To her credit, Shakira sort of laughed it off and said "when ever he asks me", but out of the corner of my eye I saw a slightly tense-looking American woman from the label run up and swipe the micro­phone from the man's hand before he can carry on. We were then reminded that all questions must focus on the music. I suddenly felt happier that I didn't ask my babysit­ting question.

After a bit more chat — in English and in Spanish — Shakira said she had a surprise for us all. And with that she called out some bloke with an acoustic guitar and delivered a pretty amazing rendition of '23' while sitting on a slightly higher stool. 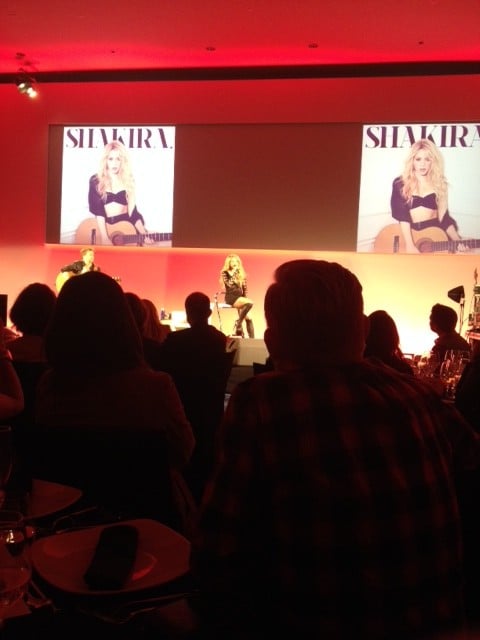 With a quick goodbye she briefly dis­ap­peared and we were left to enjoy our food (fish to start followed by beef and some chocolate mousse, if you must know), but suddenly Shakira was back, doing the rounds of the entire room, posing for pictures and generally saying 'thank you' to increas­ingly inebri­ated people. When she got to our table I took a number of covert pictures because as we've estab­lished I'm a pro­fes­sional, before we were ushered into a huddle for an official picture, which was also captured for posterity on my iPhone.

I think you'll agree it was worth it.

At about 11:45, having chatted to just about everyone, stayed for the food and been a pretty good sport (most artists probably would have legged it after the singsong), Shakira cleared off. And with that were all encour­aged to follow suit.

Cheers Shakira! Thanks for the memories.

'Shakira' by Shakira is out on Monday. 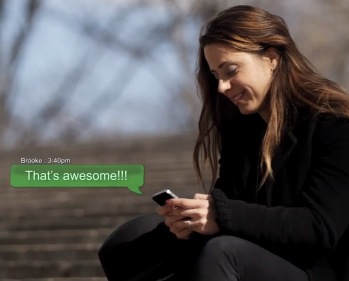 Justin Timberlake — 'Not A Bad Thing'