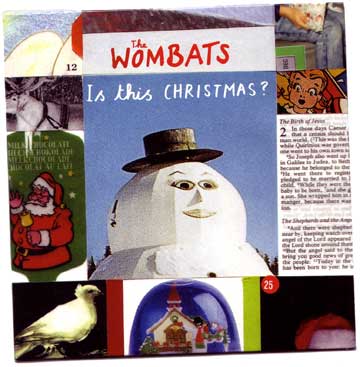 As Christmas approaches, opening the post in the morning is an exercise ter­ri­fy­ingly similar to a com­bin­a­tion of Pandora's box, Hellraiser and that bit at the end of Raiders Of The Lost Ark when all the Nazis' faces fall off. Articles such as the one pictured above — a Christmas single by The Wombats - arrive and one feels a strange com­pul­sion to explore the undoubtedly horrific contents. You can put the CD to one side and it's just sitting there, staring at you all day, demanding to be played. You chuck it in the bin and go for lunch, then by the time you get back into the office it's somehow found its way back onto your desk. It's basically taunting you. Would it really hurt just to give it one brief spin on the office stereo?

In addition, we feel a certain sense of respons­ib­il­ity to you, the Popjustice viewer. That's why we listened to the new Sarah Brightman album (it's a disaster), and why it was also important that we listened to the new High School Musical soundtrack in its entirety, just to check there wasn't anything as brilliant as 'Breaking Free' (there wasn't). In the case of this Wombats release we know you look to us to listen to this record and to suffer the con­sequences so that you don't have to. We are Beefeaters of sorts, self­lessly sampling poten­tially lethal pop music; we are body­guards, willing to take a bullet as the pop industry attempts to blow your brains out.

Later today we will give in to tempta­tion, and face up to our respons­ib­il­it­ies, and listen to this Wombats single. If you don't hear from us by Monday something awful has happened, but don't shed a tear. It will mean that we fell in the line of duty, and there is no greater honour.