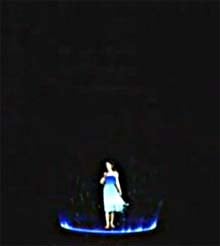 Did you watch Live Earth? The answer is probably 'no'. It seems many people missed this oppor­tun­ity to check out how Madonna's guitar-playing skills were coming along or to see one of the Pussycat Dolls running around a stage with a video camera for NO APPARENT REASON. It's a shame more people did not tune in — the whole thing was like the Dead Diana gig, ie 98% shit but in a com­pletely cap­tiv­at­ing way.

Without Razorlight at their disposal organ­isers of the Tokyo leg made more of an effort, opening with Genki Rockets being rep­res­en­ted by a life-size hologram. You might say that if you're going to hire a hologram machine you might as well hire one that can make a lady look ONE HUNDRED FEET TALL but even the little Genki Rockets hologram was better than a million real-life Gary Lightbodys.

You may remember we told you about Genki Rockets and their amazing 'Heavenly Star' track last year. In case you missed that the story so far is that the singer is called Lumi, is 17 years oldand was the first human born in space. She has never visited Earth. Despite the fact this is clearly made up we think this back-story make Lumi's opening of Tokyo's Live Earth both POIGNANT and THOUGHT PROVOKING.

Here is a Youtube link to the audio of Genki Rockets' new song which, as is tra­di­tional these days, someone has slapped online with an accom­pa­ny­ing picture of something or other. The song is called 'Breeze' and is very similar to 'Heavenly Star' but, if the Sun decides to come out between now and the end of August, might become one of those songs we get sligthly obsessed with.