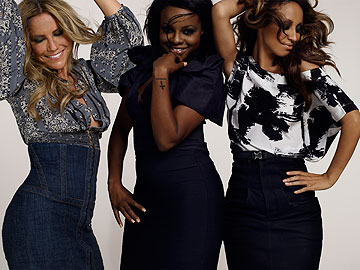 Sugababes albums are becoming something of an annual British insti­tu­tion — like Wimbledon, the Chelsea Flower Show and, er, Girls Aloud albums.

Anyway, their new col­lec­tion of tunes is due in a few months but their comeback single is out next month and it's called 'Girls'. It is literally quite brilliant.

Here are the main things you need to know about it:

1. It's based around a rewritten version — ie use the chorus, Sugabung in some new verses and bits — of 'Here Come The Girls', which UK readers will be well aware soundtracked a series of Boots com­mer­cials last Christmas and is therefore a song lodged firmly in the British psyche yet sur­pris­ingly under­ex­ploited by The Usually Quite Opportunistic Pop Industry.

So those are the main things ou need to know.

Want to listen to a clip? Go right ahead…

Well you get the general idea from one second.

One of the clever things about the track is that as well as not sounding like anything the Sugababes have done before while sim­ul­tan­eously sounding like a brilliant Sugababes single it also fits in perfectly with the brassy, Ronsonised soul sound of pop in 2008 (well, 2007) but, unlike a lot of stuff clut­ter­ing up the music industry at the moment, it doesn't sound like it's trying too hard to pull the sound off — one of the Sugababes' main selling points has always been how effort­less their hitmaking seems, and it's a theme that continues with 'Girls'.

There is a good marching band bit and the four best lyrical bits on the song are:

While it's perhaps slightly deflating that the comeback* single isn't a brand spanking new song, and whiie releasing the tune from a Boots ad might prove an easy target for people who like to keep them­selves busy talking about how the band have lost their edge, it's a great track, it's unex­pec­ted and, like 'About You Now', it's a reminder that one of the luxuries the Sugababes have as the UK's longest-running girlgroup is that they needn't endlessly position them­selves as gen­rebend­ing sonic pioneers with every new release. Rather, they can just con­cen­trate on banging out the hits. Which is what we have here.

Don't be surprised if you hear this track every­where — not least in ad a few breaks — as the year draws to a close.

Kylie's 'The One' video surfaces, is unexpectedly amazing