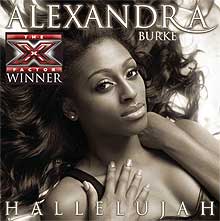 Things we don't want to hear any more about until 2009: "Isn't Alexandra's version of 'Hallelujah' pointless/amazing, isn't it pointless/amazing that Jeff Buckley's version is back in the Top 3, isn't this a victory/a totally hollow victory for real music etc etc".

As for whichever 'crusades' are currently running regarding the Buckley version — appar­ently there's one in The Sun — we fail to grasp how any of this is a 'real victory for real music over Simon Cowell's plastic pop rub­bishzzzzzz' given that none of it would be happening without The X Factor. "Readers! Let's really teach Simon Cowell a lesson and show him that he's powerful enough to get Jeff Buckley in the Christmas Top 5 without lifting a single finger." "Oh and let's show that The X Factor is manip­u­lat­ive and not about music by making people buy a song not because they like it but as a token of their dislike for something else." LOGIC FAIL.

The 'victory for real music'  brigade are really making no sense at all with this whole 'Hallelujah' business — what we have here is a victory for the ability to write melodies which are good enough for an X Factor winner's debut single. Cathy Dennis can do that, you know. She can also write songs like 'Toxic'. Did Leonard So-Called Cohen write 'Toxic'? No. (Subs please check) What has been estab­lished here is that Leonard Cohen could, if he wished, pitch some songs for the next Westlife album.

"Oh but it's the lyrics that make it so sub­vers­ive." Yes. Very sub­vers­ive. Considering nobody even knows what they actually mean. (??!) Well done everyone.

(As an aside, is it just us who finds any sort of 'crusade' to get a track 'back in the charts' com­pletely embarrassing?)

Is this still the worst Christmas song of all time?