Here's something we got in the post last week. 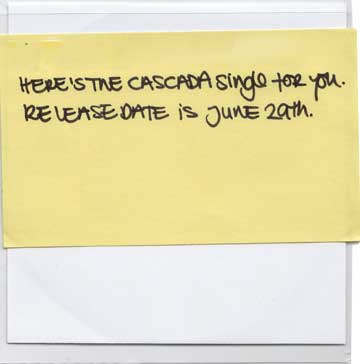 Not exactly the sort of thing to neces­sar­ily brighten your morning.

Point one in its favour: it's got a great title. 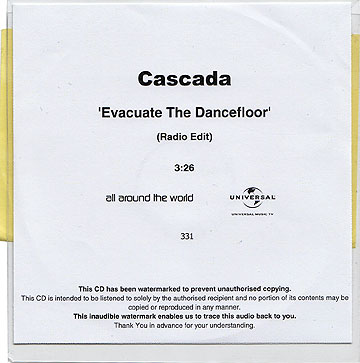 And guess what — it sounds a bit like a Lady Gaga song! Well, not 'a bit like' — this song is so clearly and shame­lessly and tri­umphantly based on the RedOne/Gaga oevre that when we put this on in the office two people inde­pend­ently and unpromp­ted started singing 'Just Dance' over the top of it.

Is that good news or bad news? It's hard to tell because 'Evacuate The Dancefloor' is far from shit, but someone somewhere has to hold their hands up and say 'hello, yes basically this is the most oppor­tun­istic pop single of 2009'. It's not just that 'Evacuate The Dancefloor' apes a currently in vogue pro­duc­tion style — people do that all the time. What's so sur­pris­ing is that it takes that style and grafts it onto an act who were, as far as we could see, doing fairly well for them­selves with a totally different sound. You can under­stand how it might seem wise to move the act on before the arse falls out of the club scene they helped define, but it's not as if the RedOne sound won't seem old hat in 18 months as even Gaga moves her sonic style on for album two. Perhaps there's no view to the future at all; pre­sum­ably there will be loads of remixes which sound exactly like the Cascada of old and perhaps this is simply a method of getting Cascada played on the radio right now in May 2009.

To this end Radio One have the exclusive play on Friday (we're guessing via Scott Mills), so keep your ears out then hit YouTube about twelve minutes later for radio rips aplenty.

A bad thing about this song: There are even two (two!) raps in the middle eight — one is a vocodered sort of affair, followed by a budget price
Eminemesque rap bit ("guess who's back with a brand new track" etc)
which ends with a request to "drop it down low, low, let me see you
take it to the dance floor, yo".

What the lyrics are all about: The chorus goes "evacuate the dance­floor, I'm infected by the sound"; beyond this there's a load of autopilot Gaga whit­ter­ing about "it's got me hyp­not­ised", "kill the lights", "time is right", "it feels like an overdose" and so on.

It's a sin(gle package with something for everyone)

Carolina Liar — 'Show Me What I'm Looking For'