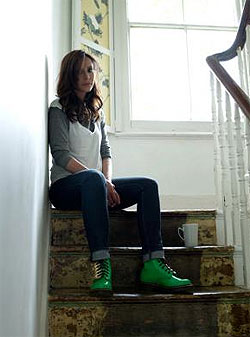 In the olden days — 2003, say — this sort of article would have been fine with a non-amusing but at least vaguely inter­est­ing headline like "a picture of Nerina Pallot looking a right mug (mug, right)" or "Nerina Pallot economy showing green shoes of recovery".

In 2010 — because let's face is 2009's pretty much over and done with as far as we're concerned — it's just supposed to have a load of keywords. Sad really.

Anyway it's not all bad news because the remix in question is really brilliant. We mentioned it (it's the 'Superpowerless mix') on Twitter a few days ago then Nerina's 'people' got in touch to say, basically, 'well if you like it that much do you want to do it as a download'. 'Yes,' we said. 'Yes that is exactly what we want to do.'

Key points about this remix:

1. It's actually still got the song in it (ie it's not like that fist-gnawingly terrible XX mix of the Florence single).
2. It also contains some shouting.