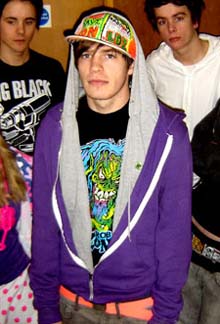 You will learn a lot from our interview with James from
Hadouken! but if you are about to rush off somewhere here are the five most important
pieces of inform­a­tion we have gleaned from the floures­cent frontman.

1. It
was not a conscious decision to ensure that all members of Hadouken! are the right side of ugly.

2. The
plot of James' own film adapt­a­tion of 80s cartoon Thundercats can be summed up like so: "the
Thundercats leave their own earth and then it blows up and then they go to
that other place and then Mumm-Ra lives there and he is a bit pissed off that
they moved in on his home pad".

3. James claims to be uncom­fort­able in the presence of naked people.

4. He
does not believe that anyone living outside of will buy Hadouken! records.

5. James
agrees with the history books that Kylie Minogue's 'Street Fighter' movie
was indeed, a load of old shit.