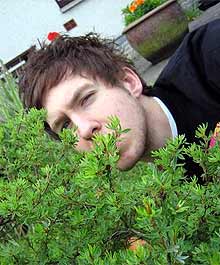 1. He hides in bushes but this does not prevent him making VERY DANCEABLE VERY POP songs called things like 'Acceptable In The 80s' and 'Merrymaking At My Place'.

2. He is basically the new Stuart Price, not that we've finished with the old one yet but it is always useful to have a spare in case one is hit by a bus and/or Madonna's 4x4.
He is also a bit like Mylo except NOT BORING.

3. His album is titled 'I Created Disco'.

4. As well as being 'cool' and 'down with the kids' he does things like remixing All Saints' 'Rock Steady'. As he notes on his com­pletely impen­et­rable website, "this is an official remix, none of your fucking bastard 'mash-up' shit, and you can find my rework on CD2. Regrettably, the CD also contains the original version of 'Rock Steady', but any problems can soon be overcome by using the 'skip' button on your CD player". Ooh get her, etc etc.

5. You can hear some of Calvin's VERY GOOD MUSIC at his MySpace, which is at www.myspace.com/calvinharristv. Also on his MySpace are some things that flash, a pho­to­graph Calvin took of himself in the toilet, and a celebrity lookalike generator which says he is a cross between Claude Debussy and Rachel Stevens. That is what his music is like too, except obviously nothing of the sort. It is a nice idea though.

Robyn — With Every Heartbeat