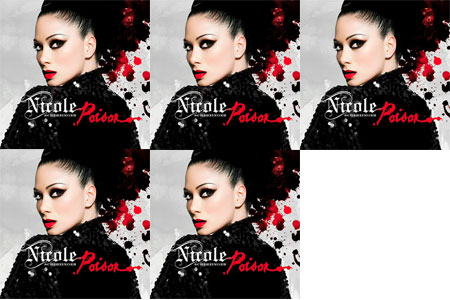 'Poison' by Nicole Scherzinger: quite a good song.

Here are five artistes we'd like to see release something that sounds a little bit or a really rather a lot like 'Poison' in 2011. Obviously they should all be aiming for a 'Bad Romance' but let's be realistic.

1. Britney Spears
Imagine. JUST IMAGINE. If she's back on form with something on a 'Womanizer'/'Toxic' level — rather than sexless rumpojams like '3' or the career low that was 'If U Seek Amy' — we could be looking at the comeback of 2011. Something that sounds quite a lot like if not totally identical to 'Poison' would not be a bad idea, but if she does something else we won't hold it against her.

2. Cheryl Cole
2011's a make or break year for Cheryl. Actually that's bollocks, she could slay a unicorn on live TV in March and be fine by June. But she's yet to deliver the doubter-defying megatune she requires to exist as a singer, if that's how she hopes to exist. A 'Poison' would do the job.

4. Leona Lewis
Posh frocks and being walloped in bookshops are all very well but in order to really 'smash it' and 'kill it' in 2011 Leona will need to 'up her game' and 'have fire in her belly' and [THAT'S ENOUGH CLICHES THANKS — EMPOWERMENT ED] and that is where a balls-in-the-air elec­trorave poppers anthem like 'Poison' will come in. That or the much-hinted-at Hurts 'collabo' but let's keep the pace up, love, for all our sakes.

5. Nicole Scherzinger
Do you remember when 'Bad Romance' first appeared and some people went "well it's alright but it sounds a bit too much like 'Poker Face'"? Well, a) 'Poker Face' was not exactly a bad song to sound quite a lot like, b) 'Bad Romance' sounded like 'Poker Face' (already one of the tunes of last year) but five times better. This is essen­tially what we are looking for from Scherzinger in 2011. RedOne has produced the whole album — it's not impossible that there is a 'Bad Romance' to 'Poison''s 'Poker Face' somewhere in that album's twelve (plus inter­na­tional bonus tracks) songs. On the other hand Nicole and RedOne may have shot their col­lect­ive load on 'Poison'.

We will meet you back here in twelve months to see how it has all gone.