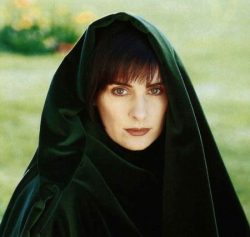 If you were to go through my record col­lec­tion you’d find a lot of sup­posedly ‘cheesy’ stuff — Jean Michel Jarre, Vangelis, David Bowie's soundtrack to Labyrinth, Ultravox etc — but nothing in my stack of vinyls causes as many raised eyebrows as my col­lec­tion of Enya's earlier output.

It seems like she’s been forever banished to the new age dumping ground, a place she shares with much lesser acts like Enigma, Era, Adiemus and those gregorian monk albums that pop up every now and then. I know it's pretty warped to call a 70m-selling artist under­rated, but I think it's about time she gets the recog­ni­tion she deserves!

Granted, the Enya revival has been going on for a while now but few have outed their love for the lady, fearing to loose their street cred. But all you need to do is listen to hear that 'über cool' genres like chill wave, witch house and baeleric owe a huge debt to our mononym­ous heroine! I applaud former half of Postal Service, DNTEL, for taking the first step in making Enya house broken by doing a full remix album of her songs. Also, a recent, dubsteppy remix of arguably her most popular song has been doing the rounds lately.

But honestly, nothing compares to the original. Put on your satin robe, light some scented candles and give in. Enya, you the bomb.

And for those of you that think that was all a bit full on, how about an even more chilled version!?

For you in countries that have Spotify, here’s a col­lec­tion of what I consider to be her best tracks.

Mark Ronson is still tweeting about the Gossip album