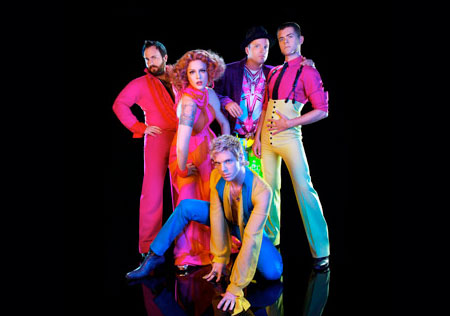 The Scissor Sisters have done a new song!

2. "'Do The Strand'?" think Popjustice's pen­sion­able readers. "As in the Roxy Music song of yes­teryear? The opening track of their iconic second album 'For Your Pleasure'?"

4. They've covered it for War Child, who've got a new album out. The whole point of this new album is that a load of old duffers ('legends') have delved into their back cata­logues and picked tracks for The Youth to cover. In this instance we find Roxy Music selecting 'Do The Strand' for Scissor Sisters.

6. The rest of it will be online later today on War Child's YouTube channel, or streaming on the website of 'official media partner etc etc' NME. All the blah blah blah is at www.warchild.org.uk/heroes.

7. There's a great bit towards the end of this song where Jake stops doing the lady voice and it goes all deep 'n' exciting.

8. Do you know what? We're aware that their last album campaign ended a bit like a wet Wednesday and we know that the second album wasn't really what a lot of people (eg us) wanted from a second Scissor Sisters album but we are TOTALLY UP FOR a big Scissor Sisters comeback during 2009. We don't know what they've been up to (apart from a rather nice Del Marquis track we were sent last year but, uselessly, forgot to write about) but if they've got it right a Scissors comeback could be one of 2009's big pop things.