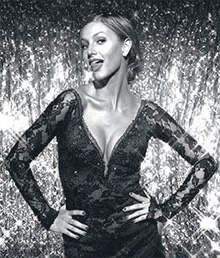 You are a popstar. But where do you go when the whole world has had a good laugh at your inability to hold it together on live tele­vi­sion, when no one likes your albums, when you've hacked off part of your face to try and make yourself look more like your more popular, less intel­li­gent sister and when all you've got for your troubles is a part time job with Brenda off X‑Factor?

If you're Ashlee Simpson then the first person you'd be on the phone to would obviously be Robert Smith from The Cure.

She has also convinced Tim Rice-Oxley ("Just to let you know Tim Rice-Oxley is not writing with Ashlee Simpson!" — Keane's 'people'), John Legend and Chad Hugo to work on whatever audio disaster she has planned, although to be quite honest even if she had Timbaland, Mark Ronson, Stuart Price, Nigel Godrich and the Scissors Sisters working on her new record it would still be a com­pletely unne­ces­sary project and a total waste of time for everyone concerned***.

Who's new on the PJ Almighty?