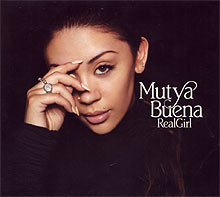 Some people are already over Mutya, bandying around phrases like "boring live", "can't she do something a bit more like 'Freak Like Me'" and "who is going to buy this music".

We say: for crying out loud, the single's not even out yet, stop the hating and let's have a listen to the album.

To make things easy we have given each song a 'Buenos Out Of Ten' rating.


'Just A Little Bit'
Despite being a session-musician-tastic, "let's have a jam and see what real music we come up with" sort of soul track, this is quite likeable.

'Real Girl'
This is a good song, hence it being the first single.

'Song 4 Mutya (Out Of Control)'
This is really good. We have mentioned this once or twice already.

'Strung Out'
This is the second-best song on the album.

'It's Not Easy'
"It's not easy being right all the time," trills everybody's favourite body-art obsessed pop lady who isn't Amy Winehouse. "Well, someone has to be." That is quite a good lyric for a chorus, isn't it?

'Not Your Baby'
A bit like 'Rocksteady' by All Saints, but different. A bit brassy and upbeat.

'Wonderful'
This is the one we mentioned before, with the heart­break­ing "tomorrow I'm leaving this town and I'm not coming home" line. Beyond that it is Your Basic R&B Slow Jam.

'B Boy Baby'
Controversy alert! There has been some debate at PJ Towers over whether this is a) brilliant or b) The Worst Idea For A Song Of All Time. Basically one person thinks it is good and everyone else thinks things like, and we quote:


However you will be pleased to hear we are over­rul­ing all of those people and giving it seven Buenos out of ten.

'This Is Not (Real Love)'
THE WORST SONG YOU WILL HEAR IN YOUR LIFETIME EVEN IF YOU LIVE TO BE EIGHT HUNDRED YEARS OLD.
(No Buenos)

'Paperbag'
This is unfor­tu­nately not a cover of that Lene song about putting paper bags over boys' heads and shagging them while imagining they are your ex. Nor is it about cures for hiccups. It is an R&B mid-tempo jam. It is 'alright'.


A solid, six-Bueno album with some good singles on it.

Some pop by Justice