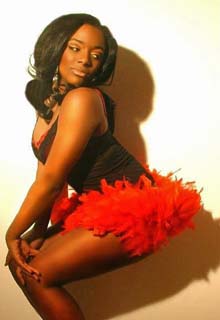 This is a picture of a singer called Cleo looking at her own bottom. She looks generally quite pleased with it and so she should be. It is a very nice bottom.

About one million years ago Cleo was in a band called Cleopatra but now Cleo is a solo singer and is releasing a single called 'Feelin' Like This' which, to be quite honest, is really nothing for anyone to get too excited about.

Although it is better than most of the Kelly Rowland album.

'Of note', however, is her cover of Kym Sims' 'Too Blind Too See It' which is quite possibly one of the greatest pop records ever to be released with a blindness theme in a very specific period of the 90s.

Here is Cleo's version of the song.

It's quite good in a 6/10 sort of way, even if it does need a bit of a kick up the arse to really get things going. Perhaps that is what Cleo is waiting for in the above picture…

If in doubt chuck in some robots