So, naturally, we have not down­loaded the album.

But if we had down­loaded 'Born This Way', and if we had put it into iTunes, and if we had given each song a star rating INSTEAD OF LEGALLY STREAMING IT ON THE METRO WEBSITE THEN LABORIOUSLY MOCKING UP AN iTUNES SCREENGRAB WHICH IS DEFINITELY WHAT WE HAVE DONE, this is how we would rate the songs. 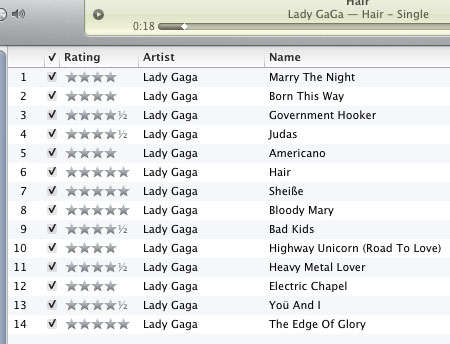 And what about the bonus tracks you'll hear on the Special Edition format? Well 'Fashion Of His Love' is one of the tracks Gaga played us in demo form a year ago then again when we saw her at the end of March this year. Remember when she went out of her way to thank Whitney Houston at the Grammys in February? She was talking about how she imagined Whitney belting out the 'Born This Way' single but 'Fashion Of His Love' (along with 'Marry The Night' on the main album) also struck us as chan­nel­ling Whitney's spirit. In our 'Fashion Of His Love' notes from the more recent listening session we have written the phrase 'techno monster'. As for 'The Queen', we heard it' for the first time in March and haven't heard it since. Our notes are fant­ast­ic­ally shit — all we've written is "Ronettes", "Belgian techno", and "I can be the queen you need me to be". We're looking forward to hearing it again. (We haven't heard 'Black Jesus † Amen Fashion' so that will be a nice surprise.)

Shakira has met her "voice twin"

Kaka — 'Worth Waiting For'