Here's an ad that's currently running on the London Underground. It's called 'Face The Music' and it's an ad for that British Music Experience thing that's running at the O2. 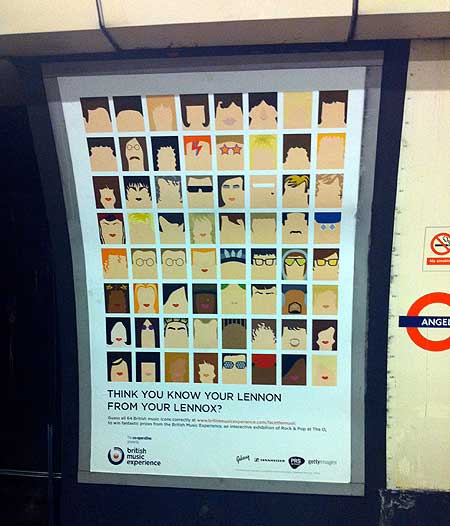 These sort of things pop up every couple of years — The Observer Music Monthly 'Abba To Zappa' campaign worked really well, for example, and Craig Robinson's legendary Minipops deserves a mention — but (we are about to state what should be blind­ingly obvious here) they only really work when you recognise the people in the ads. WHO ARE HALF THOSE PEOPLE? To their credit, at least the BME are trying to make a feature out of the fact that half their 'icons' are com­pletely unre­cog­niseable — the small­print invites people to guess them all and win a prize. It's not really a very good advert for British music, is it?