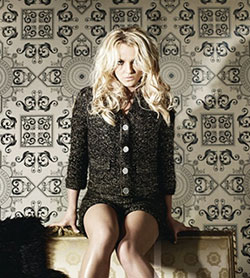 It's something to do with Ryan Seacrest. We've just tuned in online. Let's find out what's happening.

3:27 They're talking about juicing things. Fruit and veget­ables, that sort of thing.

3:28 Talking about Britney's workout routine. Ryan: "Is it dance oriented?" Britney: "No". Amazing.

3:28 Time for an ad break. What, one wonders, does Britney Spears do when she has three minutes to herself? Perhaps it is time for a bit of 'touch of her hand'.

3:36 They're back with Britney! Oh, they're playing 'Hold It Against Me'. Do you think something might have gone wrong? Has she gone to the toilet and got lost? Is she locked in the cublcle?

3:37 Two minutes left of 'Hold It Against Me'. Will they manage to kick the toilet door down before the end of the song?

3:40 They're now doing the 'first play' of 'Till The World Ends' except it's been on iTunes since this morning. This is a good song.

3:44 "Let's take that to the club," Ryan Seacrest says. Let's not Ryan Seacrest. Let's just have a nice listen to it.

3:45 It's hard to hear what is happening in the studio above the noise of Ryan's studio people snig­ger­ing at his hilarious persona, but Britney does occa­sion­ally make a sound. Do you think she did actually make it back from the toilet, or are they simply playing in a series of "yes"/"no" Britney sound effects while the hinges on the cubicle door are unscrewed?

3:48 We're back from the ad break and it's straight into Justin Timberlake's 'Like I Love You'. Sometimes we fantasise about a parallel pop universe in which Britney and Justin stayed together. And if, in 2002, instead of splitting up they'd stayed together and had a baby, the baby would now be nine years old. And by nine years old we mean old enough to make a song as great as 'Whip My Hair'. What we're talking about here readers is Britney and Justin's child forming a duo with Willow Smith. That, we think you will agree, would have been quite good.

3:55 Inconsequential chat about nothing.