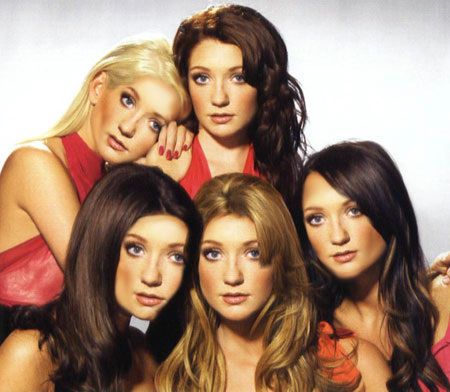 We have updated the Popjustice Almighty. And the six artistes currently under dis­cus­sion are…

1. Britney Spears
Whatever she does next year stands an extraordin­ar­ily strong chance of being Very Listenable Indeed. For the avoidance of doubt we have not heard 'Hold It Against Me', and yesterday's post clearing things up was not really meant to be anything more than the pulling together of a number of loose ends, so please a) don't ask us to review/leak the song, b) approach with caution. In other news: STILL AMAZING.
» More Britney

2. Nicola Roberts (pictured)
The real essence of everything that made Girls Aloud brilliant and a reason to be excited about 2011.
» More Nicola Roberts

5. Simon Cowell's TV Thing
A new primetime music show, you say? With various popstars on it, you add? With Simon Cowell in charge or at least in some way involved, you clarify? Why, that could be awful but will most likely be Just What The Doctor Ordered, where 'The Doctor' is not in fact just a doctor but in fact A SURGEON who has watched main­stream music tele­vi­sion FLATLINE and [THAT'S ENOUGH OF THAT — METAPHOR ED] Anyway, getting decent acts to appear on a popular show is a chicken and egg situation — if you only get Pixie Lott nobody watches, and if nobody watches you only get Pixie Lott — but if anyone's going to make a massive new pop show work it's a man who's bought all the eggs and has every chicken working for him.
» More Simon Cowell's TV thing

666. 'Michael Jackson'
And when we say 'Michael Jackson' we really mean whichever cunt thought that the stream of utter shit currently passing for a new Michael Jackson album would in some way 'make do'. Actually a couple of the tracks are alright but most of it just sounds like the 'Jacko' setting on a crap Poundland keyboard.
» More 'Michael Jackson'