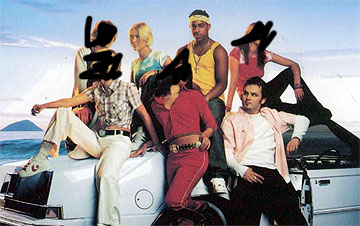 The first single from S Club 7 may have kicked off with the words "don't stop, never give up", but Christ on a bike there has to be a point when you just LET IT GO. As comebacks go there's half arsed and there's three-sevenths arsed and reports from the current uni­ver­sity tour by three ex‑S Club 7 members sit firmly in the latter.

On our forums, Popjustice viewer onrequest has this to say:

"S Club 3 performed at the local SU last night where I work. Usually we
cover the events for the internet but cameras were totally banned, none
of the staff were to talk to S Club and we were under strict
instruc­tion not to let anybody near them. Their tour manager
told staff the reason is because all seven of them are getting back
together in March, so until then they're not allowed to talk to anybody. I approached Jo when she was leaving and she simply replied 'shit… shit sorry, I can't talk to you I'll get in trouble'. Bradley
and Paul chatted though and when quizzed about the 'reunion' said 'It's
just us three for now'. When I pressed the issue and they repeated
'just us, for now'."

"They ARENT getting back together in March! Its just a low profile club tour which is obviously receiving attention. They sold Leeds Uni out last night. They couldnt do a meet/greet because the crowd was literally electric!"

What may or may not be the relative successes and failures in this Sunday's charts?