As everybody knows, Wired magazine is the greatest magazine not about music in the history of things made out of paper that aren't about music.

Sometimes of course it does include stuff about music, and when it does the results can be quite spectacular.

Well get your looking gear around this cover story. A cover story so drenched in potential amaz­ing­ness that we have come to what can only be described as A COFFEE SHOP to read it. 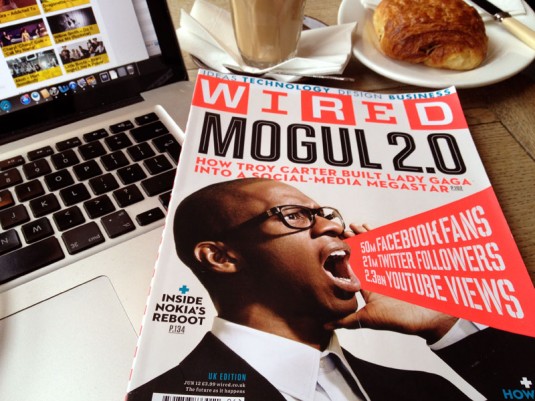 Anyway what's going to happen now is we are going to read this article.

Considering the ingredi­ents — world's greatest magazine that isn't about music giving a behind-the-scenes account of the 21st Century's greatest popstar who isn't Mollie King — this had better be good.

We have now read the feature and finished our 'latte'. Here is what we found out.

Massive photo of Troy Carter sitting at a desk looking out of a window.

Seems a bit cruel to overlook the marketing push around the last Nerina Pallot album but fair enough.

Lots of words. This is good. Opens with a descrip­tion of Troy's offices, which are still being built: "pop art and leather furniture", "Lady Gaga costumes sit behind glass", "dark wood and brushed marble". It sounds a bit like the old Popjustice office before we upgraded.

Troy is described as "short and trim".

A meeting is described between Troy and the head of Tumblr. The head of Tumblr is explain­ing that Tumblr is brilliant. Troy explains that his own thing, Backplane, which powers Littlemonsters.com and is going to roll out similar sites through­out the music and celebrity industry, is brilliant too. There are half a million people signed up to Littlemonsters.com. Key quote: "We could go to Facebook for numbers, but give us 500,000 really engaged people, and the blast radius will be enormous."

Ultimately the Backplane is about allowing Lady Gaga to sell as much as she wants to as many people as she can. "She still has a deal with Universal Records, but there will come a time when she'll release music through her own site."

There's a bit of backstory on Troy, and a decrip­tion of how the Backplane came about — Lady Gaga was in a cinema carpark, having just watched The Social Network, and she phoned him and said, "why don't we start one of those for my fans?". (Cue cash till sound effect.)

On the right hand side a full page photo of Troy walking down a street using an iPhone. It's a white iPhone.

On the left hand side there are lots more words, most of them about Troy securing funding for the Backplane. At one point someone tells him that he needs to 'speak Google'. There are meetings with Google, Facebook etc.

Regarding Lady Gaga's approach to endorse­ment, one of Troy's business partners mentions that "Gaga doesn't go around holding up deodorant". The next sentence ref­er­ences Gaga's Farmville promotion.

Troy says that his biggest frus­tra­tion is "the lack of scale in the music industry. The fact that no one has sold 100 million copies of an album is frustrating".

Loads more words, and a photo of Troy in his office. There are piles of vintage copies of Interview magazine.

Some stuff about recruit­ing people to work on Littlemonsters.com, and the site's soft launch. Gaga wanted an activ­a­tion code when it went live but Troy wouldn't give her one.

There's some chat with Laura Lyne, who runs fansite Gaganews.com. She explains that Gaga's people will feed her stuff for her site, and that during busy times she'll get an email a day from Gaga's people.

There's a bit more stuff about Troy's business meetings, including one with Daniel Ek from Spotify, and a bit where he says that going round record labels is like "a tour of a dinosaur museum".

It was very nice thanks for asking.

So was this the greatest magazine feature of all time?

Not quite because OBVIOUSLY we wanted more stuff about launching and devel­op­ing and con­tain­ing Lady Gaga, and we would like to have read some stuff about Troy's general vision of pop, and this is basically an article about the Backplane, but it was a jolly good read and there's loads more in the feature than we've outlined in this 'precis' so it's well worth buying anyway. 8/10. 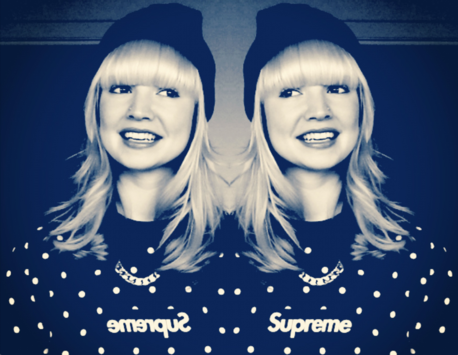