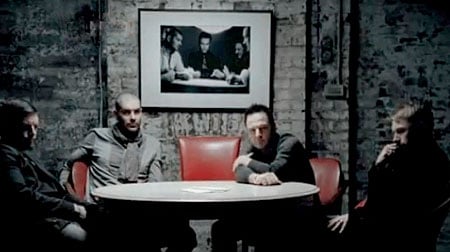 In his role as Magic FM disc jockey Boyzone's Ronan Keating managed to bag the first play of Boyzone's new single 'Gave It All Away' yesterday afternoon, and despite a slightly odd sound it's sort of brilliant. The first words you hear are Gato singing "I will learn to live before I die" so it's a massive blubfest from the off, panning out into the sort of mild-manned, big-chorused tune you might reas­on­ably expect to hear on Magic FM many centuries into the future.

The track was written by Mika and had ori­gin­ally been lined up for release some time ago but there was all sorts of behind the scenes dick swinging which held things up. Fortunately, Mika has now granted the band per­mis­sion to use the song. We wonder what could have changed Mika's mind?

The four remaining members of Boyzone have made a video (here for the time being, due here later today) in which they each write letters to Stephen Gately, have a bit of a cry, 'remember the good times' and generally blur the line between genuine emotion and rampant cynicism — proof, at least, that those boyband values live on.

Julian Perretta — 'If I Ever Feel Better' (Devil's Gun mix)