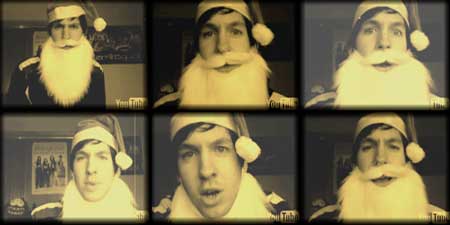 As Christmas rolls around this year so do memories — not all of them pleasant — of last year's legendary Popjustice vs Calvin Harris Countdown To Christmas.

If you're new to Popjustice this year what you need to know about this online atrocity is that about 13 months ago we emailed Calvin Harris asking if he'd do a sort of daily video advent calendar thing. He was 'game for a laugh' so we sent him some jokes by email and before long this arrived back from Harris Towers.

That was day one, and you certainly can't fault his attention to detail. The graphics! The talking toys! The funny Scottish accent! Day two brought another install­ment, then came day three. There was another one on day four, and then again on day five. Day six brought with it a further Countdown To Christmas video and day seven heralded the arrival of another. We took receipt of extra videos on days eight and nine, too. By this point the joke had gone from being inten­tion­ally unfunny in a good way to to unin­ten­tion­ally unfunny in a bad way, and we weren't even halfway through. Day ten came, and Calvin delivered another video. This was repeated on day eleven, and then day twelve. People might have thought we were joking about doing it every day until Christmas — they certainly weren't laughing by this point. They weren't laughing on day thirteen, when Calvin sent us this thir­teenth video, or on day fourteen, when the four­teenth turned up. Day fifteen was a par­tic­u­lar low point, and things weren't much improved by day sixteen. Think this paragraph is boring? Imagine it's taken you seventeen days to read it, and you'll have some idea how we, Calvin and Popjustice readers felt by December 17 2007. The eight­eenth video was followed a day later by the nine­teenth, and after that there was the twenty first, but not before we'd had the twentieth. The twenty second and the twenty third soon passed, and then finally we got to the twenty fourth.

On the first anniversary of this harrowing his­tor­ical event finally coming to an end — a VE Day, if you will, for this assault on humour — let's just have a moment of silence to ponder the human suffering caused by the Calvin Harris Countdown To Christmas, and to spare a thought for those readers we lost. WE WILL NOT FORGET.