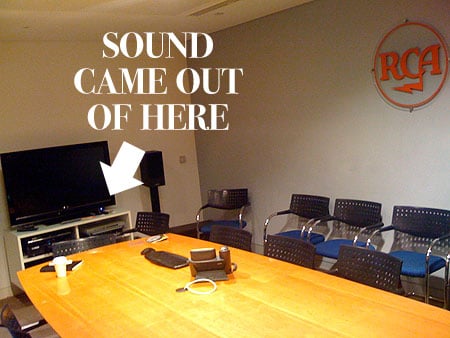 There's no easy way to break this to you readers but we went to RCA yesterday and we heard an extraordin­ary new Hoosiers song.

NO WAIT COME BACK.

It's called 'Choices' and it sounds a bit like a less 80s version of La Roux with warmer synths
and a bloke singing. It doesn't really sound anything like The Hoosiers
at all — it's more like the sort of song you'd pick to launch an electro boyband but it's a good grown up pop song at the same time. The chorus is a chant of "stop giving me choices, stop giving me choices" and as a whole the song's really exciting and euphoric and next-year-sounding, with big melodies pinning the whole thing down.

Basically, do you remember the annoy­ingly catchy bits of the first Hoosiers album? Right, well imagine those song­writ­ing skillz used for GOOD instead of EVIL. That is what 'Choices' is like. It's actually, object­ively brilliant, and to these ears sounds like the first unex­pec­tedly amazing comeback single of 2010*.

We appre­ci­ate this news, that The Hoosiers have recorded at least one song that doesn't make you want to throttle someone, might upset some fans of depress­ingly bad guitar music but, on the bright side, Scouting For Girls have a new album out in 2010 and we bet that's a real stinker so fingers crossed for that one, right?

* It might not be the first single but it should be**.
** Unless their other new songs are better but that seems rather unlikely as this is, at the end of the day, still The Hoosiers we're talking about.

Rage Against The Machine — 'Killing In The Name'