Sorry about this readers but GOOD GOD have you seen this utter piece of rubbish? It is an offi­cially sanc­tioned Beatles USB stick, announced yesterday. It's got Beatles songs on it and some other bits.

This reminds us of the time we attempted to pop­ular­ise the idea of muffin USB stick formats as a new way to sell music. 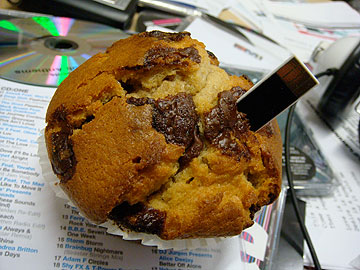 Except at least you could eat the muffin. And a muffin single would cost £2.29. This Beatles thing costs about two hundred pounds! Yes, we know they could put the Beatles back catalogue inside a baked potato then shove it up a cow's arse and you'd still shift 8,000 units but Christ alive, what are you supposed to do with a small plastic apple? Put it on your shelf? Oh yes that would be a good idea because it's not as if every single person who came round your house wouldn't see it and imme­di­ately recognise it for what it is: a miniature beacon of your massive stupidity. Yes put it on your shelf. It def­in­itely won't be the first thing to be picked up and chucked out of the window by your wife when she's screaming at you about a divorce. Brilliant.

Rihanna's coming to London! On November 16! For a live show! And we've got tickets! (To give to you)