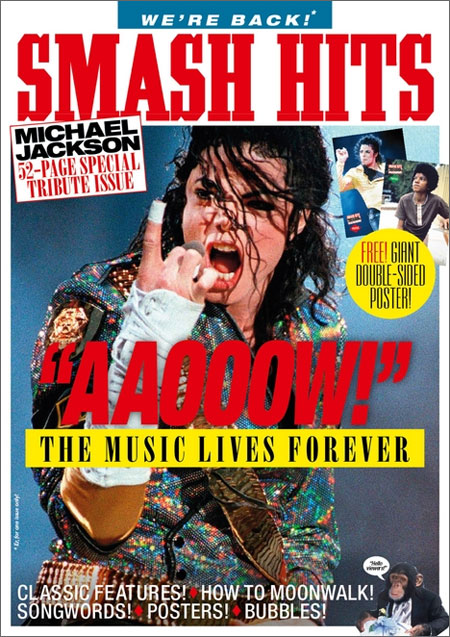 Combining the Jacko-friendly warmth of mid-80s-era Smash Hits with the rampant com­mer­cial oppor­tunism of late-2000s-era Bauer Media, here's the cover of a special tribute edition of Smash Hits which is due out next Tuesday.

Music Week report that "high­lights will include inter­views, original Smash Hits reports from Jackson's live tours, as well as posters, songwords and the defin­it­ive story of Bubbles" but the really exciting thing is that the editorial team is being headed up by former Smash Hits-when-it-was-good editor Barry McIlheney. IF THIS IS RUBBISH IT WILL BE EVEN MORE TRAGIC THAN MICHAEL JACKSON ACTUALLY POPPING HIS CLOGS IN THE FIRST PLACE.

Music Week have McIlheney saying that the £2.99 one-off special "will be paying tribute to Michael in classic Smash Hits style. Everyone seems to be for­get­ting in the current tabloid frenzy that this was one of the greatest pop stars of all time".

A photograph of Shakira looking quite nice