In less than twelve months, Ariana Grande's gone from former Nickelodeon sitcom star to vaguely diverting "throwback" chanteuse circa 'Yours Truly' to the cusp of potential pop greatness with 'Problem'. All while slipping in dog piss, defending her penchant for ponytails and trying to avoid eye contact with a giggling Rihanna at some award show or other.

She also found the time to record a new album and I went to hear it last week in a small record label meeting room.

As is the way with these things, it's hard to get a proper feel for an album on one listen, but 'My Everything' feels like a genuine attempt to steal the currently vacant pop throne, as well as being the kind of glor­i­ously all over the shop album that you often get when the planet's song­writ­ing and pro­duc­tion a‑list decide that they all want to get involved with an artist while the pop iron is extremely hot.

Eighty seconds of pleas­antly breathy Mariah-isms, but this is basically a waste of everyone's time.

Lyrically we're not exactly breaking new ground  here — "liar" is rhymed with "fire" — but this subtle banger is an obvious album highlight. The chorus feels like it's about to go off but never quite does, Ariana's insane vocal flights of fancy weaving in and around a textured, EDM-esque backdrop that Wikipedia says is the work of part-time aural terrorist David Guetta, but it's actually a Max Martin/Rami/Carl Falk trifecta of amaz­ing­ness so don't worry.

This mid-paced bonanza features a massive Ryan Tedder-esque chorus, which is apt because it was quite literally written by Ryan Tedder. Production-wise, high­lights include a sort of rolling, marching band beat, echoey "na, na, na" bits and there's a great moment where Ariana sings the words "heart skips" and — guess what — the beat skips! There's a good lyric as well, which goes something like, "we be loving like angels, living like devils", although Ariana sings so high and so rapidly that she could have been saying anything.

This song — and its accom­pa­ny­ing alien-kissing, bra bullet-shooting, Zedd-embar­rass­ing video — feels like the arrival of Ariana as a proper popstar, and hearing the song blasted out in a small record label meeting room certainly doesn't change that.

This #slowjam sounded a bit boring when it first emerged last week, but in the context of the album it's a nice breather from all the fizzing synths that dart around the album's first five songs. Not sure about fish dinner fan Big Sean rapping about fancying Ariana's mum, but what can you do.

Produced by Benny Blanco and Cashmere Cat, 'Be My Baby' is a low-slung, Rihanna-esque mid-paced stomper with a chorus that goes "be my, be my, be my baby and drive my crazy". It is, as that line suggests, not exactly high art in terms of lyrical insight, but there's a great middle eight drop bit and some abso­lutely insane backing vocal bits that make Ariana sound like she might explode at any moment.

She's already 'teased' bits of this via the medium of Instagram video (see above, obviously), but this is that one that samples Diana Ross' 'I'm Coming Out' and is appar­ently inspired by an ex-boyfriend who may or may not of cheated on her with a man. Again, Ariana needs to work on her diction because the first verse of this is so inaudible it sounds like a chorus of cats, but the sample — which was also used on this Notorious B.I.G song which is itself sampled here — is used in a really inter­est­ing (and sur­pris­ingly subtle) way. Again, it's not exactly a balls out banger, more of a mid-paced, bouncing bop of a song.

9. 'Love Me Harder' feat The Weeknd

As anyone with fully func­tion­ing ears will tell you, The Weeknd's own songs are a non-stop borefest of emotional inertia, but 'Elastic Heart' showed that he's pretty good in small doses. And that's true of 'Love Me Harder', which starts small and slightly pervy — "if you let me invade your space" is uttered in the first verse — before mush­room­ing out into a 'throbbing', electro-heavy chorus. There's a really catchy post-chorus bit where Ariana sings "love me, love me…harder, harder" before some big vacuum-esque synths zip around all over the show.

Oh dear. This Harry Styles-penned, string-drenched ballad is so insipid that even post-Bodyguard Alexandra Burke would probably turn it down for being too clichéd. Ariana does her best, and the pro­duc­tion tries hard to smother the lyrical clichés in all the strings and pianos the label could afford, but this feels like a fairly cynical PR exercise. Mind you drafting in one of One Direction is an upgrade of sorts con­sid­er­ing the first album featured one of The Wanted.

This Rodney Jerkins-produced banger is bril­liantly odd and that oddness is only magnified by the fact that it's sand­wiched between the album's two syrupy ballads. Coming on initially like something from Christina Aguilera's 'Bionic' (wait, come back), it fizzes and pops like classic early noughties R&B, A$AP Ferg's grunts and hollers peppered through­out, while Ariana sounds con­vin­cingly coquet­tish in a way she hasn't done before.

Ariana's been crying, she's been missing her baby, she's been pondering why she only realises what she has after its gone, etc. There are lots of pianos and the faint whiff of the stuff that clogged up her first album, but this one is basically quite a boring way to end an album that shows flashes of proper megastar potential.

'My Everything' is released on August 25 but will probably be streaming somewhere this week, one imagines. 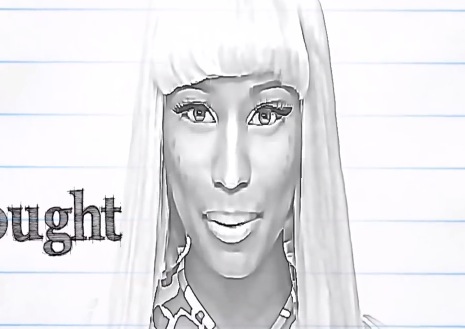 Meghan Trainor interview: "I didn’t realise the world would be calling me within five weeks"