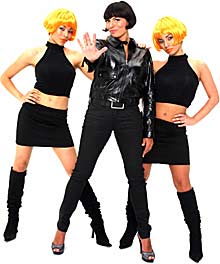 Betty Boo's got a new single out in a couple of weeks. It's a col­lab­or­a­tion with Jack Rokka and it's called 'Take Off'. It's basically 'Perfect Exceeder' and 'Yeah Yeah' with Betty Boo on it.

In fact it's so like those other songs that we're not sure if it's amazing or not. Does it even matter if it sounds like other songs? It's all very confusing.

Let's send an email around the office asking people what they think about the track and what score they would give it out of ten.

5/10: "It's alright but every dance track sounds like that now. Luciana has a lot to answer for."

5/10: "I’m sure it sounds amazing on mind-bending rave drugs but it’s hardly Where Are You Baby, is it?"

We think some of those are a bit harsh. Basically what we want to know is whether to feature the track as Song Of The Day on Monday. Perhaps you, the Popjustice viewers, could help out.

Take a look at the video…

…and email us on [email protected], telling us why it should or shouldn't be Song Of The Day on Monday.

Songs Of The Week 1