Killing time in town a couple of weeks ago we took an oppor­tun­ity to pop into Zavvi on Oxford Steet. It used to be Virgin, but now it's not. We thought it would be nice to peruse the week's new single releases, see who was trying to palm off CD singles full of rubbish, identify various acts' attempts to flog 7" picture discs as 'collector items' to people without turntables, and so on.

The singles section had been replaced by some generic rubbish. 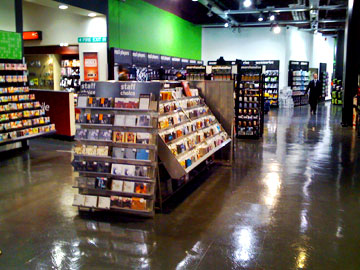 We couldn't find singles anywhere. Wandering around the 'store' (shop), it was obvious that the decision to pull physical singles was hardly an issue of space. There were plenty of areas like this… 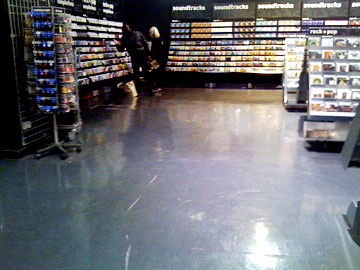 …where the singles racks could have been. It's simply not worth Zavvi stocking singles, even in its flagship branch in the capital. (We've since learned that at that point the Oasis single was available at the tills.) It was quite sad, albeit in a "who invited Grandad" kind of way.

There's an inter­est­ing thread at the moment on the Popjustice forums about CD singles dis­ap­pear­ing from Zavvi, HMV and Woolworths.

Off the top of our heads, here are some things that spring to mind on this topic.

» What con­sti­tutes 'owning' a song?

» If you can't see or hold something is it worth spending money on?

» Does that question alter if what you're spending money on is something you only intend to listen to?

» If you cannot legally buy something, are you somehow entitled to illegally download it?

» If you illegally download a song for any of the above reasons, do you
consider the direct impact this has on what the artist and label will
be able to produce in the future?

» Should stores like HMV and Zavvi, which built their business on music sales, cater for minority buyers out of some sort of loyalty?

» What sort of price would you put on being able to listen to a song as often as you like, forever?

» How fre­quently do you listen to CD singles you purchased six years ago, or take them off the shelf or out of the cupboard to admire their beautiful packaging?

» Can anything be done to re-educate an entire gen­er­a­tion who've grown up with music being 'free'?

If you're still refusing to buy tracks as downloads you'll find yourself, very soon, in the same position as those vinyl obsess­ives who once boycotted the inferior sound quality, smaller artwork and poorer 'exper­i­ence' of the compact disc.  If, on the other hand, you've never bought music in a physical format, the first few pages of Bill Drummond's '17',
in which Drummond describes the intense and unfor­get­table emotional
exper­i­ence of buying and cher­ish­ing a physical copy of 'Strawberry
Fields Forever', are worth a few minutes of your time.

A totally pointless post about Sugababes. One lacking in any sense of entertainment or news value.