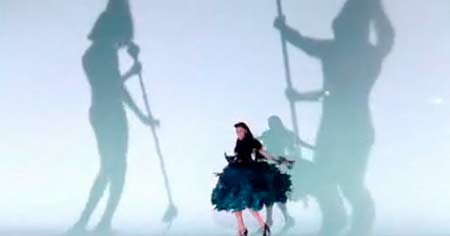 There's a new VV Brown video ready to be viewed. It's for a song called 'Game Over'. Have a little look at this.

There are some problems with it — it's an expensive video done on the cheap, for example, while the flag waving seems heavy-handed if it's for the benefit of the inter­na­tional market and just bizarre if it's intended for a British audience. Vanessa's also simply too bright for a couple of the 'dumb sexy object' bits to really work.

Nonetheless, despite trying so very very hard, without the ill-conceived where's‑me-washboard 'doo-wop indie' schtick this video seems lot more relaxed and a lot more natural than some of her previous clips.

If this video sets her up for the next phase of her career, and begins to help make sense (and make use) of VV's pretty hefty media profile, it's a good thing. It probably won't happen during this album campaign but it feels like a twelve month break and a new col­lec­tion of songs could lead to a bit of a break­through for VV. By which we mean that if VV Brown dis­ap­pears then comes back at the end of 2010 with a massive brilliant pop single, enough time will have passed for people to say "oh, famous singer VV Brown's back with a brilliant single", without remem­ber­ing that she didn't actually have a single Top 20 hit.

Then again, what do we know.

Your first chance to listen to Alphabeat's 'The Spell'

Annie — Songs Remind Me Of You