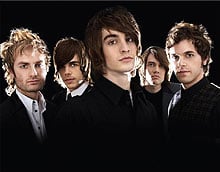 After literally setting the internet ON FIRE with their search for a new singer and then dressing up like The Killers for a load of miserable black and white photos, The Click Five have pulled their fingers out and recorded some more amazing pop songs.

Yes, we are quite aware that 'creative' people like to take their time with things like this but when it comes down to it recording pop records is still a job and at least some degree of punc­tu­al­ity isn't too much to expect.

So here we go. There are some new songs strewn across various parts of the internet including their MySpace page which you could probably find for yourself (but is here if you are lazy).

'Jenny' is a single that has been floating around for a while now. It is very good indeed in a 6.5/10 kind of way.

'Headlight Disco' is the very exciting song with amazing gay keyboards in the chorus and if Hellogoodbye actually were the poprock­e­mod­ance band they have made them­selves out to be their second single would sound a bit like this. It won't, it will be an absolute racket and will not sound a thing like this because this is The Click Five and they are different bands making different bloody songs. We've lost our train of thought here a bit but the general point is that 'Headlight Disco' is a brilliant pop song made with guitars with a dance bit in it and also a woman singing. The woman is not part of The Click Five.  GENIUS.

'Flipside' is more what you might expect from The Click Five – it sounds like The All American Rejects covering a McFly song, but certainly not 'Transylvania'.

Due to the over­whelm­ing demand for illegal The Click Five MP3s the two new tracks on their MySpace are both less than a minute long, but both serve a very important purpose. That purpose is to remind us that The Click Five are still a very promising pop band with great hair and great songs. It also allows their fans to put these clips on their own MySpace pages so that their friends can, in turn, listen to songs which fade out before they get going properly.

PS: Here is another picture of The Click Five. One of these men is not a part of the band.

YES WE KNOW NOBODY IN THE UK GIVES A FUCK ABOUT THE CLICK FIVE BUT WE THINK THEY ARE GOOD.
Previous Article

The chatter of Popjustice 20

Katherine McPhee — 'Over It'