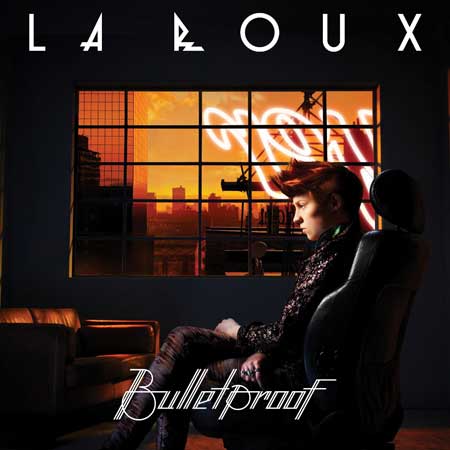 Firstly, here's the sleeve for the next La Roux single, 'Bulletproof'. The artwork for this campaign is really impress­ive, and the album sleeve (which we posted the other day) is an instant classic.

The main reason we wanted to say a thing about La Roux is that 'In For The Kill' is, amazingly, up to Number 4 in this week's midweeks. This is inter­est­ing and amazing not because the song is somehow rubbish — it's brilliant — but because right up until the single was released we didn't know anyone who thought it would be a hit. And we spoke to a lot of people about it. La Roux is the sort of artist people who work in and around music enjoy talking about — she's been on loads of the tips lists, she was a big signing to a major label, she's heavily stylised, blah blah blah. Over the last couple of months we spoke with managers, PRs, major label bigwigs and indie label smallwigs, other artists, live promoters, journ­al­ists, radio pluggers. Loads of people. Despite most people being positive about the song, nobody thought 'In For The Kill' would be a hit. Full dis­clos­ure: we didn't think it would be a hit, either — Top 20, perhaps.

And now here's a song nobody thought would work, which after a few weeks on the charts is up into the Top 5 and might even end up at Number One. Simply because people really genuinely seem to like it, and are buying it. Even Radio One have started playing it. It's an amazing, sur­pris­ing and very exciting result.