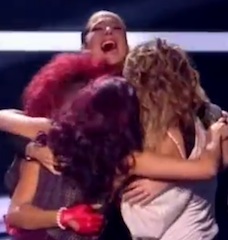 Little Mix are the first girl group in The X Factor's history to make it to the final. (STV) They will be joined by 'Russian Roulette' hitmaker Marcus Collins and Kelly Rowland’s favourite 'mentee' Amelia Lily. As a parting shot, Misha B performed Jessie J’s 'Who You Are' for the 47th time.

Speaking of Jessie J, she continued to impress with her 'attire' at the Capital FM Jingle Bell Ball in London last night. (The Sun) She skinned an alligator for her first outfit and dressed up as a Christmas cracker for the second. So inspirational.

The BBC Sound of 2012 longlist has been revealed; it includes Niki & The Dove and gurning swearm­er­chants StooShe. (BBC)

In less than a year, Adele’s '21' has become the country’s biggest selling album of the 21st century. (Official Charts)

Apart from describ­ing Travie McCoy as a "thousand-watt frontman", this is a good rundown of the KIIS-FM Jingle Ball held in LA on Saturday night. (LA Times)

Here is a pho­to­graph of Danny from McFly naked with only a plastic cup pro­tect­ing his modesty. (Heatworld) And by 'modesty' we do of course mean 'cock and balls'.

Tulisa was awarded one of the ugliest trophies in the world by a nightclub on Saturday night. (Daily Mail)

Olly Murs has achieved something neither Joe McElderry or One Direction have managed: a Number One album. (NME) Well done everybody.

And finally, a busy weekend for Madonna news: first a William Orbit produced-song called 'Masterpiece' for her film W.E. was leaked. (Ace Showbiz) Then it was offi­cially confirmed that she will perform at the Super Bowl halftime show on February 5. (Hollywood Reporter) 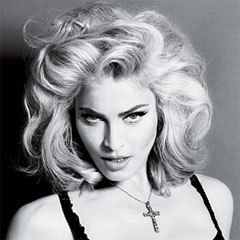 Madonna will sing some songs at the Super Bowl