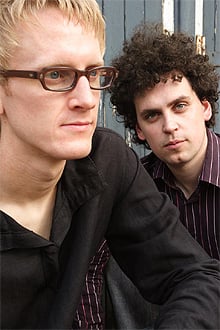 The new Simian Mobile Disco album is a bit full on.

We are not on drugs while writing this. That would be both unpro­fes­sional and ridicu­lous because it is still before lunch on a Tuesday. However, apart from the Top 200 hit single 'It's The Beat' there are def­in­itely three other good songs on the album.

'Hustler'
This was released last year on Kitsune records who do some very amazing com­pil­a­tion records from time to time. The good thing with a lot of the Simian Mobile Disco album is that once the tracks get going you can be rel­at­ively sure that there won't be too many surprises before the end. Thus you are aware of what you are in for from the off.

'I Believe'
For an album that gets a bit much in places it makes sense that one of the better songs should be a slow one. This is not a floor-filler. This is a mod­er­ately urgent, mod­er­ately epic song which would sound good in a film where someone had to drive somewhere and on the way have a long think about something serious that had affected them and possibly make an apology when they arrived at their destination.

'Hotdog'
Simian Mobile Disco obviously know their way around the dance music 'genre' but they know a lot less about bread wrapped processed meat snacks. Here is their recipe: "Let's get the rhythm of the hands / Let's get the rhythm of the beat / Put them all together and what do you get? / Hotdog". Fine apart from the complete lack of either sausage or bun. DO NOT ACCEPT AN INVITE TO A SIMIAN MOBILE DISCO BARBECUE!

Who's new on the PJ Almighty?