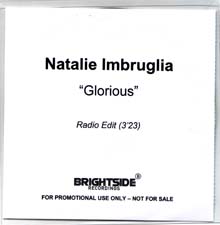 As the above headline indicates, here are ten things you need to know about the new Natalie Imbruglia single.

2. It is nothing to do with the Andreas Johnson song of the same name and although that would have been inter­est­ing Natalie's brand new song called 'Glorious' is pretty good in its own right.

3. The song mentions Frith Street. Frith Street is a street in London. Other things in London include trains, houses, several bridges, well over twenty corner shops, some trees and a horse or two. These are not mentioned in the new Natalie Imbruglia single.

4. It doesn’t sound like Natalie has exactly pulled out all the stops to get back on to the top of the music pile but the more we listen to it the more we realise it is A Bit Of A Grower and it is a nice reminder that there is more to 'Nat' than making films with Mr Bean or whatever it was.

5. Like some of the greatest pop singles of all time, there is no dis­cern­able theme, plot or 'concept' behind 'Glorious', other than 'things are quite nice around here aren't they?'.

6. The single is out on August 27 and is followed by Natalie's Greatest Hits which is out on September 10.

10. 'Glorious' is non­ethe­less good enough to make you think "this is alright. It reminds me that Natalie Imbruglia is quite listen­able. Ooh — that 'Torn' song of hers was very nice to listen to. I used to have that. I wonder where it is? The CD is probably in the pile somewhere… If only there was an easy way for me to purchase 'Torn' again to replace the copy I may or may not have lost. Hang on — there's a Greatest Hits coming out? Perfect! That will almost def­in­itely have 'Torn' on it as well as all her other hits, so it's a complete bargain. I can't think of any of her other hits right now but she must have had quite a few or she wouldn't be releasing a Greatest Hits, would she? I will go down to Woolworths or HMV or Virgin but probably not Fopp on the day of release and I will purchase the Greatest Hits com­pil­a­tion. That is what I will def­in­itely do".

Songs of the week 6