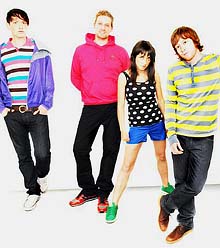 "I JUST PICTURE MADONNA STRANGLING MEN WITH HER LEGS"

We put The Whip's pop opinions under the spotlight…

The Whip are one of the best guitar bands in Britain, but they are also one of the best dance music makers as well as being a great pop group too, although people have decided that they are actually 'new rave', possibly due to colourful wardrobe displays like the one on the right.

Casting other genres aside, we decided to put singer Bruce Carter's pop cre­den­tials to the test with some hard-hitting, teenmag-style questions.

And here is what happened.

Hello Bruce. Can you dance?
When I was growing up I hated dancing because there was a dancing com­pet­i­tion at the disco in the first year of secondary school when everyone is trying to make a good impres­sion. In the first round I did a 'Staying Alive' type dance, just to make my mates laugh and this woman grabbed me and said "right, you're in the final". There were only three of us in the final and I just froze and stood still in front of the whole school and then walked off stage. That damaged me for years and I didn't dance again until I was 18. I still dance really badly but I've got my con­fid­ence back now.

Girls Aloud or Sugababes?
You could discuss that for hours! Probably Girls Aloud, they're just a bit more edgy. There's a bit more energy there, better clothes and more erotica. My favourite Girls Aloud singer is probably Sarah Harding because she's from our neck of the woods.

Do you think your lady drummer Fee could hold her own against them?
Fee can unleash verbal hell when necessary. She's good. She's the one after gigs who'll storm off and scream "where's our fucking money" at the promoter. She's well hard. I'm a lot more timid than she is. She wouldn't say anything naughty though, she just wants to see justice done.

Kylie or Madonna?
Kylie def­in­itely and it's all because of 'Slow'. I have this picture disc of the single and she looks amazing on it — it's just the picture of Kylie's body spinning round on the player that I love. It's my favourite Kylie song ever. 'Get Into The Groove' was the first single I ever bought so there are some points for Madonna but it's def­in­itely Kylie.

Is Madonna too old to be rolling around in leotards?
I can't imagine what you'd feel like when you get to that age and what all that exercise would make you feel like, although I reckon she's got more energy than the rest of the world put together and is con­stantly limbering up and ready to go at any given minute.

Do you think she should ease up on the weightlifting?
I'm not into the muscle thing, it's a no-no. I just picture Madonna strangling men with her legs – and not in a sexy way. Kylie wouldn't do that sort of thing.

X‑Factor or Eurovision?
Eurovision. X Factor is tied to just one sound but Eurovision crosses many bound­ar­ies and it both unifies and divides at the same time with all the politics. I like a lot of European music and Eurovision is a lot more entertaining.

What do you make of Sebastien Tellier rep­res­ent­ing France?
It's brilliant! He's the only person in the world who could get away with doing Eurovision; he's got his tongue well and truly in his cheek with that one. He'll def­in­itely be able to pull it off.

As a singer would you do well on X Factor?
No, I'd do really badly because they make them sing intricate notes and it's all about being com­pletely over the top. I don't know if I could push myself that far, some of those people manage to unleash hell without any accom­pani­ment and I think I'd feel a bit naked without a band to hide behind.

Leona Lewis or Shayne Ward?
Leona Lewis. She looks like a girl I went to uni­ver­sity with so I feel an affinity even though I don't know her. Leona does need to go wild, maybe grow hairy armpits or something, she seems like she's still trying to keep her mum happy and she needs to let loose a little bit.

Adele or Duffy?
Probably Adele — but only because Jim Abbiss who did our album did some stuff on hers as well, so it's a loyalty thing. I don't like that so many pop stars are being churned out of the Brit School, I think everyone prefers Rocky Balboa, someone from the streets to someone like Ivan Drago who's been mech­an­ic­ally manip­u­lated into being a killing machine. I don't think it's good that so many people are trying to be the new Amy Winehouse; people just cling onto one thing and try to exploit it. It's like putting too much jam on your toast and there are loads of different things you can put on toast. You could try Marmite, peanut butter; there is loads more on offer at the musical delicatessen.

Right. Thank you very much, Bruce from The Whip.

*
The Whip have a YouTube page here
Previous Article