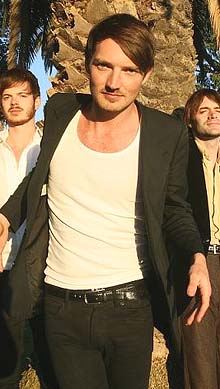 "Our balls will be shrinking from all the steroids"

The Feeling are one of British pop's best groups of guitar playing men. They are certainly better than 'The Pigeon Detectives'.

As they release their second album, Dan from the band speaks to us about his wardrobe, Sophie Ellis-Bextor and his old jobs with Speedway and Jennifer Paige. Blimey…

Hello, Dan of The Feeling. Let's start with a boring music question: is the new album better than the first?
That's like comparing children. You can't have a kid, then another and decide that the second kid is better than the first. I've given birth to these – in a fashion – so I wouldn't want to. One is more grown up than the other.

Do you think that people who didn't like the first album will be won over by the second?
I don't give a fuck. If they didn't like the first they probably won't bother listening to the second. Even if you sell a million records you have to remember that a lot of people still haven't heard of you. Some people still ask me if The Feeling is a new band and you realise how long it takes to really slip into popular culture.

Is that the kitchen sink we can hear on 'I Thought It Was Over'?
We weren't really conscious of whether the single was over-produced, we just wanted to have a bit of fun with the record. We had lots of synths and all sorts of shit; it's all over the place that record. Jimmy Iovine, who runs Interscope Records and is one of the most powerful people in the music industry, said to us at the auditions for the European version of the Pussycat Dolls, "you know what you're doing with those harmonies and those crazy things you do? I want you to do it but put it on steroids". Which we took as a good bit of advice; we'll be pushing things even further in the future.

We dread to think what the third album is going to sound like…
Oh, we'll probably be dealing with the comedown on the next album, our balls will be shrinking from all the steroids.

What on earth were the European Pussycat Dolls auditions like?
They were shocking. I'd been out drinking the night before with Chris from the Pet Shop Boys and then we got the call the next morning that Jimmy Iovine wanted us to go to the auditions. There were all these girls miming along to Pussycat Dolls songs and shaking their asses all over the place. It was quite shocking and I was feeling very delicate that day.

What's the like­li­hood of a duet with Sophie Ellis-Bextor in the future?
I'd love to do a duet with Sophie. I want her to come and sing a cover with us on stage. We did 'Video Killed The Radio Star' last time we were at G‑A-Y but I think 'Don't You Want Me' by Human League would be a good cover. It's a natural duet. I haven't asked her yet but she'll read this and then she'll know.

Why do you never see happy joggers?
They all look miserable and that is because they are in pain. Running hurts. People are putting them­selves through agony, torment and pain for some reason, and they might feel rewarded after­wards but they are in pain while they are jogging. I'm sorry, but it’s just not natural.

Did you know Speedway were on their last legs as soon as they had their 'Genie In A Bottle' hit?
It was terrible wasn't it? Jill is great though, I really liked her but I haven't seen her in bloody ages. She was going out with her manager at the time and she ended up dumping him for Alex Parks and I always thought that he blamed me for that, for turning her into a lesbian. Why would I do that? Anyway, I did much worse jobs than that: I used to play guitar for Jennifer Paige. There are record­ings of me playing guitar for her and doing the 'Crush' backing vocals.

As a smart dresser, do you even own such things as a t‑shirt or dirty trainers?
I don't, actually. I just didn't have space for clothes like that and never wore any of them. I do have one pair of comfy baggy things that I wear around the house, they're my old Taekwondo trousers, although I only ever did two classes. Otherwise, all the rest of my clothes are quite smart. I live across the road from a cheap booze shop, but even when I go across there I still get ridicu­lously dressed-up. People ask me why I've dressed up to buy cheap booze but I'm sorry, it's all I've got to wear.

Thank you very much, Dan Gillespie Sells of The Feeling.

Have a look at Leon Jean Marie's 'Bed Of Nails' video…