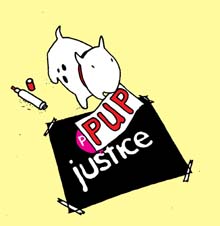 "I PREFER IT IF THERE ARE PIGEONS."

Rex The Dog wags his tail in the direction of Popjustice…

We first heard Rex The Dog's stuff when Richard X (CLANG!) played us his first single and since then he has gone on to become one of the most amazing things in the world of pleas­antly blippy elec­tronic pop music, as his debut album will prove when it even­tu­ally 'drops'.

Despite not being able to talk properly Rex The Dog is a genius and can therefore type, so we emailed him over some questions and here's what he sent back. (His nice handler suggested that we give him a big bone to say thank you but that seems a bit over the top, really.)

Why do some people think dogs can’t make music?
Hmmm, well I can’t directly operate the syn­thes­izer but I have lots of input when we make music. If you hear a bad drumbeat or a sound that’s a bit stupid in our music, those were the times when I was out of the room. Have you ever seen the withering look that can be given by a dog?!

For a long time there was a lot of prejudice against dogs on the dance music circuit. Is this changing or is it still a struggle?
I’m not sure about this, is there prejudice? Prejudice is bad. I am pre­ju­diced myself, mainly towards cats, and pigeons, and baths.

Do you bark at strangers in nightclubs?
Sorry to give the boring answer, but I don’t come to clubs, I have trouble when the music is this loud.

Do you prefer frisbees or sticks?
Actually if you pick up a frisbee in front of me I start to really go around in circles, because it means it’s time to go outside. Not good to tease me like this, and I think sometimes it’s done to distract me so that some cowbells or other stupid sound can be sneaked into a track.

Do you get taken for walks by your master? and where do you like to go?
I’ll walk anywhere. I prefer it if there are pigeons and things that stink.

What is your owner doing right now?
He’s drawing our car for our album cover, really slowly and carefully…

It is about time you did some more remixes. What’s coming up?
Yes, we were thinking this too, but we’ve been so busy final­iz­ing the album, even when you think it’s finished, there’s lots to do making artwork, starting a fanclub, doing cartoons (they take so long). There are no remixes at the moment but we do have a secret wishlist of tracks we would like to do.

What are your plans for 2008?
Our joint plans are to release our album, run our new fanclub, play lots of shows and to learn new animation tech­niques. Other plans are to get as much food as possible and to eat it.

How clean is your kennel?
Ah, there’s no kennel, just a basket. It’s pretty clean but there are some dead spiders. I store them there to eat later. I’m a forward thinking dog.

Thank you very much, Rex The Dog.

BWO — 'The Destiny Of Love'