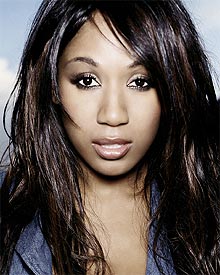 She's off X Factor and she's not shit. Will wonders ever cease? We have a chat with the lovely Maria Lawson…

Maria Lawson. That's her in the picture. Maria's a good thing.

There's a slim chance that she only seems so good because everyone else on X Factor was so abso­lutely terrible, but we're liking A) her and B) her 'new material', so it's entirely plausible that she is ACTUALLY GOOD rather than just 'good because she's not Chico'.

She's signed a big deal with Phonogenic and phrases like 'priority artist' are being knocked around at the moment. Hopefully she will 'do a Natasha Bedingfield' rather than 'doing a Ben Adams'.

Anyway, we thought it would be nice to catch up with Maria before the whole 'campaign' really kicked off — and here's what she has to say for herself…

Maria! Where are you?
I'm in my car, parked up, ready for interview. My hazards are on!

Safety first.
Well exactly. I'm on the way to Hertfordshire to go to the studio. I don't know where I am, the sat nav has directed me.

Fill Popjustice in. You've been working with Diane Warren. Have you just been going through her bins looking for scraps?
No! I was in LA for a month! I recorded one of her songs, she knew it happened. It's all above board! We went through a few songs and picked out one which was really good.

Is it a ballad?
It's ballad-to-mid-tempo-ish.

Ballad-to-mid-tempo sounds a bit 'Shayne Ward second single'.
Oh no, it's not like that, it's, er, very different. It's very soulful. (Guffaws) But things are going great. I finished the X Factor tour then shot over to LA and I've done about twelve songs to far. I can't wait for everyone to hear them!

Presumably everyone else on the tour was furious as Hell that you were going to LA.
No, I don't think they were. Everybody was such a happy family. (Laughs)

Oh come on.
They were saying, 'Good luck, I hope it goes well'.

But they were thinking 'Please let there be a problem with the visa!'
I was a little bit scared initially of the whole thing, but they said, 'Go and do your best, that's all you can do'.

That's a bit of a barbed com­pli­ment, surely. Anyway, you were at the RCA launch the other week. Did you meet Jamie Foxx?
Yes! Yes, I had to meet him after­wards. It was a brilliant show. I've been a fan of his for a long time, from even before he did the Ray Charles movie.

When he said, at the start, 'Can all the ladies move to the front', did you go to the front or did you think 'Hang on! This is sexist claptrap and I'm having none of it!'?
(Laughs) Well, I had a good view where I was. Actually I was by the bar. But I thought I'd stay there. We went backstage after­wards and met him.

What did you make of his 'full-figured chocolate ladies' monologue?
Well, Jamie Foxx is just Jamie Foxx, isn't he? He loves the ladies, and there were a selection of ladies backstage.

One of the pieces of inform­a­tion we took away from the showcase was: Jamie Foxx – probably not gay.
Definitely not. Definitely, def­in­itely not. He's got a daughter. Although obviously you can have a daughter and be gay.

We live in modern times!
Exactly.

Are you going to be dropped after your first single?
The label have been so incred­ibly sup­port­ive. That's why we've taken our time with this project.

Well you haven't really taken that long, have you.
Well, I've been a writer and a singer for a long time and I didn't want to throw it together too quickly. I mean everybody else went first – but I've written, I've invested my heart and my soul into this album. It's up to the public now.

Explain your music.
Well, my roots are classic soul. From Dionne Warwick to Marvin Gaye. I grew up listening to a lot of Motown, but I love rock stuff like Tina Turner too. We've gone back to basics on this album! And put lots of pop into it too. It's soulful pop too – with a hint of acoustic rock.

Steady on!
We're thinking about doing 'You're Beautiful' for the b‑side of the first single, but I want to be com­pletely original, so we're not sure yet.

Are you, Alesha Dixon, Siobhan Donaghy, Lily Allen 'et al' going to have a big old bitchfight?
No, I think there's space for everybody. My style is really different and I'm not trying to fit into any category. I'm just being me.

How exactly are you qualified to be a decent popstar?
I'm good – I don't take drugs, I don't smoke, I go to bed early.

That sounds awful!
Hahahaha! Well I don't have that rock 'n' roll lifestyle. I'm just a normal girl! A normal girl from London!

Are you going to be on crack this time next year?
Hm, I don't think so. That's not really one of my interests.

It's not a great hobby really.
No. I'm quite against drugs.

And the single's out when?
July. Album in September. I just can't wait!

Your MySpace page is a bit miserable at the moment.
Er, yes. It's 'under devel­op­ment' at the moment, hahahaha. I need to get some more friends, don't I? I'm a bit lonely, you see.