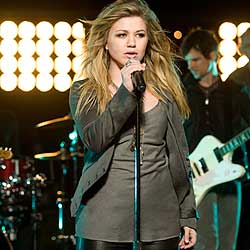 When Kelly Clarkson was over in London a couple of weeks ago she set aside a few minutes for a chat with Popjustice in a posho hotel 'suite'.

When we arrived she was wiping her hands on things and moaning about the fact that the dye in her new pair of jeans had rubbed off and was causing her some distress.

So if these were your own cream leather sofas, you wouldn't wear those jeans on them, would you? You'd think, 'no. I'm not going to sit down in these jeans. That colour's going to come right off'.
Well I wouldn't have cream-coloured sofas.

How dark?
My whole house is really dark. Although I do have some brightly coloured rooms. My orange room is my favourite.

What mood are you in when you go in there?
Honestly, I don't really think about it.

Oh.
But the room I do most writing in is very dark; it's tiny and away from the rest of the house.

Is there a window in that room?
Yes.

What can you see out of it?
All my land, and ponds, and animals. I have seven horses, four miniature horses, and eight dogs.

Do you ever line all the animals up according to size, from smallest on the left to biggest on the right?
No.

Why not? You could start with the dogs, then move up to the miniature horses, then the full-sized horses.
They would never comply with that. They all have very different per­son­al­it­ies. I love them.

Now, we've been given six tracks from your new album to listen to. Does that mean that the other ones are rubbish?
The other ones just haven't been mixed yet.

Sometimes you get album samplers sent through and they've got four or five tracks on them, and the reason for that is that those are the only good ones.
Oh no. Not with this one. We're just teasing you. There's one track on the album that you won't have heard — it's so good, it's like Eurythmics meets The Killers meets Garbage. I did that one with Ryan Tedder. We love all the same influ­ences, the same bands. It was fun to get in the studio and meet a male version of me.

What would a male version of you look like?
My brother.

What do men not under­stand about women?
I don't know — I'm not a man and I don't claim to be. I don't want to even begin to get in men's heads.

Now then. The album artwork. What's going on?
It's my 'super hero' picture. I have super powers, I'm telling you.

To be honest, it looks like you're about to flash your boobs.
I have a full shirt on.

Was this an attempt to react against the imagery of the last album, after it didn't sell that well?
That was a very popular album as well, I just thought it would be fun to change it up. But a lot of the new album is very fun and in-your-face. The cover photo shoot was very different to anything I've ever done. I'm biting at the chomp (??) for the next album already. It's so everyone gets the full grasp of me. It's hard to pinpoint me.

Do your fans know you as well as they think they do?
I'm changing, ever-changing, so once people think they've pin­pointed you, you change. The one thing my fans love is that variety. It keeps them inter­ested, and it keeps me inter­ested, because I love so many genres of music. That's why I love pop music; if you're in a category, you get stuck, but with pop you can keep all the influences.

Do you find it a bit unnerving that some of your fans like abso­lutely everything you do? That there are people in whose eyes you can, slightly weirdly, do no wrong?
I think those people are awesome! (Guffaws) I have no problem with those people. Those are my favourites.

What's the rela­tion­ship between hats and music?
Hats… And music?

Do people make better music when they're wearing hats?
Am I on Punk'd?

No Kelly it's just an interview. Clearly there might not be a rela­tion­ship between hats and music. But there might be. What do you think?
I don't know — there's funky hats, there's soph­ist­ic­ated hats, there's con­ser­vat­ive hats...

In the world of jazz, for example, people wear an above-average number of hats.
They totally have a fedora style in jazz. But I don't know. I'm not that deep.

What's the worst song on the album?
Umm… (Kelly's PA bellows "THEY'RE ALL GREAT" across the room)

What's the best song on the album?
I would say ‘All I Ever Wanted.'  It's different to anything else on the radio right now.

What's your favourite dinosaur?
I would go for the long-kneck one. The veget­araian. (Kelly's PA bellows "THE BRONTOSAURUS" across the room)

Why?
I'm a vegetarian.

The ten best bits of the new La Roux video