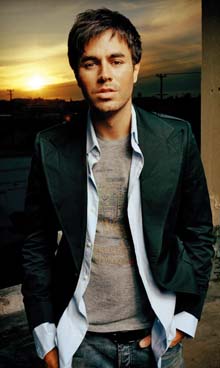 Life at Popjustice is less glam­our­ous than you might think. It's less excess and more 'CMS' most of the time — that's Content Management System to people who do not spend their days messing around in the back end of the internet hoping that nothing is falling out of the front as they cram a load of stuff in round the rear and then try to bang the door shut on it all.

So it was very nice of Enrique Iglesias to invite us up to his hotel room for a little chat.

We made a right mess on the floor, but you know what? He just didn't care…

Hello Enrique. While we have been waiting for you we have made a real mess on your hotel room floor eating a biscuit.  Should we apologise?
No! I don't give a shit about the hotel. I don't care. That's the greatest thing about being in a hotel — not giving a shit.

We also took a Dairy Milk from your minibar because you kept us waiting for so long. It cost you £2.50.
Oh I don't mind, I like that chocolate.

Do you ever think about jacking in this whole music lark?
When I feel solid­i­fied that I've done and have given as much as I can give then perhaps, but I truly don't think I've reached that point. I think I'm going to retire at 40 though, which i'll be in 9 years from now. Being on stage is what makes me happiest but hopefully by then I'll be ready to throw in the towel.

What will you do with your free time?
I'll do something else. I'll go and work for a record company maybe.

Will you live out your days in your own 'Neverland' style Enrique playground?
That would be kinda cool, I'd build a wave-pool, that's always been my dream to have a wave-pool in my back yard. I've got a pool now but it's not big enough, I want a massive one — big enough to go surfing on.

You'll get pro­test­ers camping outside your house.
How come you never get protests by other animals?

Because they can't make placards. Do you worry that every ungay man on the planet dislikes you for being rich, famous, handsome, suc­cess­ful and fancied by girls?
Fancied by girls? As if!

Don't play that card with us, 'Enrique'.
Well, I don't think men dislike me because I'm not the kind of person that anyone should feel threatened by.

One is dead. One is boring.
Those guys are real artisans. Oh, actually I'd quite like to be Michael Jackson for the day, just to see what it would feel like.

That's not a very positive outlook on things.
Relationships are hard, is that such a terrible thing to say? If the rela­tion­ship is always happy then something is wrong, I think it's normal and human to have ups and downs.

Do you enjoy the struggle?
It's not that I like the fight, but like everything in life, if you overdose on happiness, it's not a good thing. Do you know anyone who is always happy?

Yes. And they are a bit odd. Thank you very much Enrique Iglesias.